Review: Lola and the Boy Next Door 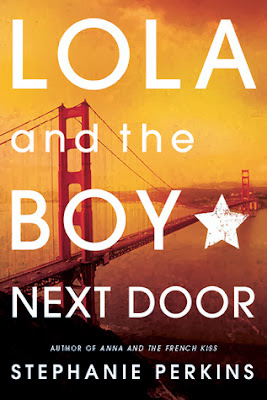 Blurb:
Lola Nolan is a budding costume designer, and for her, the more outrageous, sparkly, and fun the outfit, the better. And everything is pretty perfect in her life (right down to her hot rocker boyfriend) until the Bell twins, Calliope and Cricket, return to the negihborhood. When Cricket, a gifted inventor, steps out from his twin sister's shadow and back into Lola's life, she must finally reconcile a lifetime of feelings for the boy next door.


My Review:
Eeep! So I finally got to read this and let me just say I loved it. I became a fan of Stephanie Perkins after getting a free copy of her book Anna and the French Kiss a couple summers back which by the way I totally fell in love with, to my absolute surprise since I rarely read non-paranormal books. When I realized it was going to be a series well let’s just say I was doing a happy dance.

Where to start…I guess I will start with Lola and her awesomeness. I really loved Lola even with her imperfections. I think readers will either completely love or hate Lola I feel like there is no middle ground. Lola has her faults don’t get me wrong but I thought she was perfect with her imperfections and so does Cricket who is so totally adorable and perfect for Lola it’s great.


"No. You're delightfully screwy, and I wouldn't have you any other way.”

Lola dances to the beat of her own drum never wearing the same outfit twice, she wears wigs, and she’s always honest with others if not herself. Lola is accepting of anyone and everyone and she has a forgiving nature. She sounds pretty perfect right? Only she’s not there are a few times in this book you will honestly feel like shaking the life out of her because you are so over Max (her older douchey boyfriend) that you could throw the book.

“I don't believe in fashion. I believe in costume. Life is too short to be same person every day.”

Cricket is Lola’s old time best friend, neighbor, and first love. If I’m to be honest her only love but I won’t give too much away here. Cricket is the same age as Lola but he goes to college and he likes to invent things. He is quirky though just like Lola and they have similar style in how they dress and act. I fell in love with his character right off the bat.

"Cricket us string across the street, his long legs swinging with each step. He's wearing skinny mailman-esque pants with a red stripe down the side seam. They're a tad short-purposely, I can tell-exposing matching red socks and pointy shoes."

So a couple reasons why Lola may be hated by some readers: She kind of strings along Cricket for a majority of the book. She also ignores her feelings for him, sometimes becomes jealous, and acts immature. I understood the whole immature thing I don’t know many people who were major in high school so it was understandable to me why Lola was like that. The stringing along… I don’t know if I’m making excuses for her but I understood that too and like I said I think you’ll either get her and love her or you won’t.

"I'm the one making our lives harder. I'm the one making this friendship difficult. But he's the one who won't stop coming back. He's smarter than that. He should know it's time to move on and stay away from me.
I don't want him to stay away."

Lola and the Boy Next Door is completely adorable. I loved every aspect of this book from Lola when she’s strong and bold to when she’s weak and vulnerable. I love all three of her parents who play a major role in this book and I enjoyed that as well because a lot of books write out the parents after a while and Stephanie Perkins didn’t do that.

“Nathan nods. "Have a good time. Don't do anything I wouldn't do." I hear Andy as I'm walking out the front door. "Honey, that threat doesn't work when you're gay.”

I loved all the parts in this book about finding yourself and how even though Lola comes off as confident and strong she still falters and that made her character so much more real to me.  Oh oh and I loved how Anna and St. Clair were incorporated into Lola and Cricket’s story.

“Anna prods St. Clair's shoulder. "Come on. Weren't you gonna show me that thing?"
"What thing?"
She stares at him. He stares back. She cocks her head toward Cricket and me.
"Ah, yes." St. Clair stands. "That thing."
They rush out. The door shuts, and St. Clair shouts, "Lola, Cricket wants to show you his thing, too-oo!”

All in all, I could reread this book over and over and never get tired of it. My only complaint is the cover because I loved the original and the new one is kind of plain and boring. Other than that I am so dying for the third book in this series. I highly recommend this book and am counting down the days until the next book comes out.

The one. It stops my heart. I thought Max was the one, but... there's that other one.
The first one.
"Do you believe in that?" I ask quietly. "In one person for everyone?"
Something changes in St Clair's eyes. Maybe sadness. "I can't speak for anyone but myself," he says. "But, for me, yes. I have to be with Anna. But this is something you have to figure out on your own. I can't answer that for you, no one can."
"Oh."
"Lola." He rolls his chair over to my side. "I know things are shite right now. And in the name of friendship and full disclosure, I went through something similar last year. When I met Anna, I was with someone else. And it took a long time before I found the courage to do the hard thing. But you have to do the hard thing."
I swallow. "And what's the hard thing?"
"You have to be honest with yourself.”

Hi, there! I'm Steph, and I wrote ANNA AND THE FRENCH KISS and LOLA AND THE BOY NEXT DOOR. They have funny bits and kissing, so you should totally read them. If you're into that sort of thing. The final companion is called ISLA AND THE HAPPILY EVER AFTER, and it will be released in 2014. Two additional YA novels will also be published by Dutton—a teen slasher in 2015 and a yet-to-be-named project in 2016.