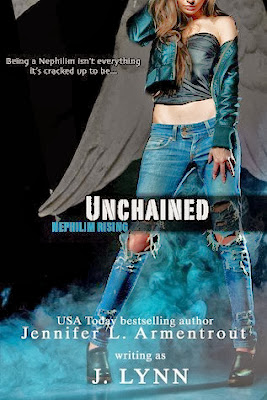 Blurb:
Between the pissed off creatures that want demon-hunter Lily Marks dead and the fallen angel who just...wants her, Lily is about ready to trade in forever for a comfy job in a cubicle farm.

The fact that she and Julian are civil to one another is enough to have her thrown out of the Sanctuary, but she can't shake her not-so-angelic stalker or how he brings her dangerously close to ecstasy.

Her forbidden relationship with Julian provides the perfect fuel for suspicion when a traitor is discovered to be working within the Sanctuary. Lily quickly finds herself hunted by well, everyone.

Her only hope is to discover the real traitor before she loses everything--and she'll need Julian's help. That is, if Julian is really there to help her...and not destroy her.

Yeah, being a Nephilim isn't everything it's cracked up to be.


My Review:
Fallen Angels have never been so sexy or so deadly.

Lily Marks is one of the Nephilim which means her life is eternal servitude in serving to take down fallen angels and dead heads. Sounds glamorous right?  Yeah not so much in fact when Lily knocks out a police officer who turned out to be a Nephilim who nobody knew about Lily begins to question her eternity fighting to take down fallen angels. Especially fallen angels like Julian who seems to understand Lily more than she seems to understand herself. When Lily gets accused of working with the enemy she seeks out Julian to help her solve the mystery behind all the Nephilim dying.

Wow I was super excited about this book when I heard about it especially since its JLA or J. Lynn who wrote it. Needless to say I enjoyed Unchained a whole lot and basically finished it in one sitting.

I enjoyed so many aspects of this book like the action packedness and the fact that there are so many secrets in the Nephilim world that I have yet to learn which is fantastic because that made me want to read the next book even more.

I did feel the novel wasn’t…I don’t know the usual JLA in that I pretty much knew what was going to happen and I had the bad guy pegged almost as soon as I found out there was one which sucked because when the truth was revealed well it was a bit of a let-down to know I was right.

Another thing that bothered me about Unchained was I am in love with Julian in all his fallen angel sinful and dangerous hotness and yet…I am deeply concerned that Michael will turn into a love interest since he is given a POV in this novel. I will NOT be happy if that happens, like at all so that point kept me from getting attached to the characters too much because I have a feeling this series will fall into the predictability realm. Surprises do happen but I guess we’ll see.

On the topic of Lily is it bad to say she kind of annoyed me in the beginning? I wasn’t her biggest fan and I’m not sure why I just didn’t feel the usual connection to her as I do all of JLA’s other characters. I did end up liking her but it was on and off for me during the story.

While there is no cliffhanger there is the promise to another book and I hope a lot of the secrets left unanswered from the first novel are touched on in the next story.

All in all I enjoyed Unchained. While it did have its faults the book was overall enjoyable and Julian was absolutely delicious and completely made this book for me.

About the Author:
About the Author:# 1 NEW YORK TIMES and USA TODAY Bestselling author Jennifer lives in Martinsburg, West Virginia. All the rumors you’ve heard about her state aren’t true. When she’s not hard at work writing. she spends her time reading, working out, watching really bad zombie movies, pretending to write, and hanging out with her husband and her Jack Russel Loki. Her dreams of becoming an author started in algebra class, where she spent most of her time writing short stories….which explains her dismal grades in math. Jennifer writes young adult paranormal, science fiction, fantasy, and contemporary romance. She is published with Spencer Hill Press, Entangled Teen and Brazen, Disney/Hyperion and Harlequin Teen.
She also writes adult and New Adult romance under the name J. Lynn. She is published by Entangled Brazen and HarperCollins.