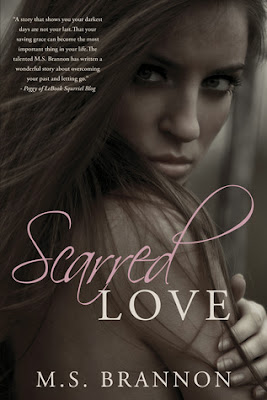 Blurb:
"I am certain, without any doubt, she was meant to be in my life. We belong to each other. I spent too much of my time consumed with what everyone else thinks of my feelings for Darcie, but the truth is, it was always supposed to be this way." ~Reggie Evans

Darcie Claiborne spent several years of her young life living with a monster, always fearing what he would do next. Clasping onto her last ounce of hope, Darcie releases a scream. It’s her final attempt to live; to survive the villain of her reality. Sweeping her up in his arms, Darcie’s knight in shining armor rescues her from the hell she’s been living; from the stepfather she's feared for all those years.

Reggie Evans has been forced to grow up before he’s ready when his mother dies of an overdose, leaving him responsible to raise his younger brothers. One fateful night, Reggie jogs by an old, run down house and discovers a young girl clinging to life as she screams for help.

Three years later, Darcie is healing and always protected by the man who saved her, but now she's fighting with something she isn't prepared to face. The growing love for the man who saved her life three years ago, the same man who’s nine years older. All the while, Reggie fights to protect Darcie from the demons of her past and new ones of her present.


My Review:
I received a copy of Scarred Love for an honest review.

The Lasting Scars of Abuse:
Darcie is scarred in almost every way you can imagine.  After being physically abused from the young age of five until she was finally saved three years ago Darcie’s body is covered with the evidence of the torment she survived through.  Darcie’s mother became a drug addict after marrying Darcie’s abusive step-father. Darcie’s mother never tried to stop the abuse and ended up dying.

“The handcuffs are digging through my delicate flesh, piercing my skin each time I twist and pull against the restraint. With each jerk of my body, the clinking sound of metal against metal sounds as I struggle to pull myself into a ball to protect my already bruised body from each blow. It’s no use.”

Survivors:
Darcie is a survivor. After so many years of abuse she decided she would scream for help and she got it. Three years later she’s on the road to recovery. She’s working towards college and “trying” to stay out of fights. Reggie and his brothers whom Darcie lives with and her new friends are also survivors surviving druggy mothers, abuse, and death the characters in this book make one big family.

“As soon as the thoughts of survival cross my mind, a frantic sound rips from my mouth. It starts out meek and the instantly escalates to pleading. I scream. I scream with the only fight I have left.”

Forbidden Love:
Three years ago Darcie was saved by a man running by late at night. Without him she would have been turned into her mothers’ replacement. Reggie was and is Darcie’s hero but he’s also something more. On the night he saved Darcie she asked him “Are you …my knight in shining armor?” and he replied “Always.” Since that day Reggie has always taken care of Darcie but the feelings they have for each other have never been like family. Reggie is several years older than Darcie but that didn’t stop either of them from falling hard and fast for each other and after the first kiss they share it’s only a matter of time.

“Why? Because it’s f**ked up on so many levels, Darcie. Because you live in my care, because your seventeen and I’m twenty-seven, because it could ruin everything.”

Inspirational:
Scarred Love is a truly inspirational story. Darcie is such a strong character even during her “weak” moments where she has flash backs she is always a great character and I couldn’t help but admire her strength. She’s very rarely afraid of anything even after everything that happens to her and I loved that about her.

After Reading Thoughts:
I loved it. There isn’t anything I didn’t love about this novel. I loved the dual POV between the characters. I loved all of the characters and their secrets and their personalities. Scarred Love is truly amazing and unique and like I said I couldn’t have loved it more if I tried. While I wasn’t a huge fan of all the drinking in the novel it did make sense. I could go on and on about everything I loved about this book but that would take too long. M.S. Brannon has truly created something amazing with this book and the amazing cast of characters and I cannot wait to read more by this amazing author. The deep emotional and twisted story will leave you breathless and wanting until the very last pages.

Thank you so much M.S. Brannon for sending me a copy of your book!

About the Author:
M.S. Brannon was born and raised in the Midwest. She still resides there today with her wonderful husband and son. When she is not writing or reading, M.S. Brannon spends time with her family, watching movies, and discovering new music. She writes romance because she believes love and heartache is the rawest emotion one can experience.