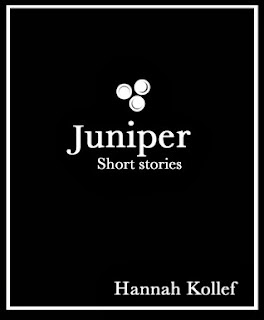 Time storms travel across North America. Prague's lonely statues come to life, hunting new members to watch over the city. Little girls hunt for needles & nettles in sidewalk cracks. And in one small apartment in New York City, the Fey gather to mourn one of their own.

The world is a stranger place than you know.

Fans of science fiction, urban fantasy and Grimm's fairy tales will enjoy these short stories and poems from Hannah Kollef, author of "Path of Needles" and "To Wake the Shadows." "Juniper" also includes an exclusive, never-before seen prequel to "Path of Needles."


My Review:
I received a copy of Juniper for an honest review.

This is going to be a quick and short review because that’s how the book was and I don’t want to give too much away.

So Juniper is a short story with a bunch of short stories in it. Hannah Kollef wrote the amazing story of Path of Needles and I loved it so I was super excited when she messaged me asking if I wanted to read Juniper.

On the downside Juniper was not really my thing. Lots of poetry and a lot of short stories I didn’t really understand the point to. That was kind of disappointing for me but I know a lot of people are into that so if you like poetry and short stories and fiction this would be the book for you.

On the upside Juniper is a short it had short stories from the Path of Needles book like the before the book which was super awesome.

All in all, while it’s not my thing and I wouldn’t reread it the story was definitely not unbearable due to its shortness. Still phenomenal writing and I just enjoyed getting some insight on some of the characters from Path of Needles.

Thank you Hannah Kollef for sending me a copy of your book Juniper!

About the Author:
Hannah Kollef was born on the anniversary of Genghis Khan's death. She believes this is responsible for her poor table manners and love of pillaging.

Hannah earned her BA in Japanese and Political Science at Washington and Lee University. Upon graduating, she decided to pursue writing and published her first novel, "To Wake the Shadows." In October 2012 she published the first in her new Paths series, titled "Path of Needles." She also launched her new website, hannahkollef.com, a multimedia collaboration with input from a variety of talented musicians and artists.

Check her out: Website/Tumblr/ Twitter/ Goodreads/ Blog
Posted by Reese's Reviews at 1:00 AM