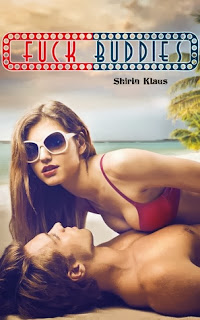 Blurb:
After a fleeting encounter in a nightclub, an old friend of Sara suggests they start a fuck buddy relationship. She's not completely convinced but finally accepts his proposal. There’s no harm on having sex with a single guy who actually is quite hot, right? But Roberto seems to have an odd idea of what fuck buddies should do together and in that kind of relationship there is always someone who ends up falling in love… Would it be Roberto’s case … or Sara’s? (Short novel suitable only for adults)


My Review:
I received a copy of F*ck Buddies for an honest review.

Sara just had sex with a friend she used to know in high school. Back then Roberto was in love with her but she never saw his as anything other than a casual friend. Now he’s seeking her out with a proposition to become FWB’s (friends with benefits) in hopes that she’ll realize she has feelings for him too. Sara doesn’t believe in love after her boyfriend of ten years was cheating on her and claimed he never loved her. Now Sara and Roberto are coming together but Sara doesn’t know if she can ever love again, not even Roberto.

This review is going to be short and sweet because I honestly can’t say too much about this book.

The Bad:
Grammar and punctuation and everything in between: F*ck Buddies has so many of these errors it’s ridiculous. The misuse of some words and where words should have been placed in a sentence made this an awkward read. It bothered me to no end.

Things like: “She had gone to that nightclub looking for sex and she would find it no matter how.” (you mean what. No matter what.)


Or this: “Music was very loud and the sound flowed inside her body, shaking until the last centimeter of her skin.” (I’m not entirely sure what that was supposed to mean.)


The characters:
I got Roberto he was fine although when he spoke in the book many of his sentences had fatal errors in them but he was alright I guess he was very one-dimensional.

Sara I did not like. I think she was supposed to be charming or something…maybe? I didn’t get her character. First love hurts but not a fan of her and made no real connection which made me sad because she didn’t seem ALL that bad.

Story line was predicable to say the least.

The list can go on and on and that was really disappointing because I was looking forward to a nice short steamy novella but nope all I got was disappointment. This book was honestly not for me and while not even 100 pages I could barely get through it.

Thank you Shirin Klaus for sending me your book for my reading pleasure.

To Check out the author: Facebook / Goodreads/Twitter
Posted by Reese's Reviews at 3:24 AM