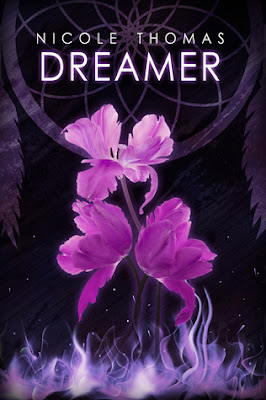 Someone is using Anna’s dreams as a weapon, and so far, they’ve gotten away with murder. Anna isn’t quite sure why those closest to her die when she dreams, but it’s enough to turn this teenager off REM sleep and relationships for good. She has more than enough blood on her hands without boys crushing on her and getting buried six feet underground as a result.

As of right now, Anna’s plan to avoid relationships with anyone outside her family has gone off without a hitch. And if it weren’t for her classmate, Liam, she would’ve continued to do so. Liam’s successfully flown under her social radar, and if he wants to avoid having his obituary in the local newspaper, he'd keep it that way. But when he confides in Anna and tells her he has dreams as well, he becomes an exception to the rule.

Okay, so his dreams might not be as dangerous, but it turns out his mother's were. Liam's mom is missing. His mom just turned eighteen when she fell completely off the grid, and Anna could be next.


My Review:
I received a copy of Dreamer for an honest review.

Anna’s dreams killed her parents, her foster parents, the foster parents after that, and the foster parents after that. Anna has 35 deaths on her conscious and to avoid losing anyone else Anna only sleeps in 30 minute spurts. Days before Anna’s birthday the boy who has been crushing on Anna for months tells her he knows what she is and that it’s not her fault for what has happened. Someone is controlling her and with her new friend soon to be boyfriends help and his fathers’ help they find the source of all the deaths in her life and it’s nothing they could have every expected.

The Goods:
Dreamer was a very original idea. It took a lot of aspects about dreams and how they work and weaved them into a tale about a girl trying to find a way to stop her dreams. People go missing there are strange voices and just an all-around interesting idea for a story.

Anna’s little sister Mimi is adorable and I loved every scene with her in it.

The Bad:
*Sigh* Nobody likes giving a somewhat negative review but Dreamer was just not for me. I had a lot of issues with the story. For instance:

The romance that suddenly sprouts between Liam and Anna honest didn’t seem realistic in the slightest. One minute Anna’s saying:

“I never did find out why he was so infatuated with me, but so long as he kept his mouth shut, I didn’t care.”

“He seriously needs to get a life. One that didn’t involve me.”

Yet not a chapter later they’re both kissing and I felt the only reason she liked Liam was because he was the only person she could tell her secret too. I never felt she had real feelings for him.

Speaking of Anna and feelings I honestly never got the sense of realness from ANY of the characters. I felt they were so bland and one-dimensional. The only thing the dad ever cared about was his missing wife and never seemed to care about his son which seemed harsh to me.

Then there’s Anna who seemed depressive for good reason but her feelings didn’t go very far. It was always I’m sad or I’m scared. It was very boring especially for a main protagonist I’m supposed to like.

Liam was probably the only character with any depth. While I wasn’t in love with his character I honestly felt no connection to him either.

An issue that bothered me was one part in the book where it’s supposed to be Liam speaking about the kiss but for one paragraph it switches to Anna’s perspective and then back to Liam’s. It was weird as I’ve never seen that happen before. I get that I got an early copy so it’s not a huge deal but it confused me for about ten minutes as to what was weird with the pages.

The villain…oh boy okay I am not giving the story away or who the bad guy is but…really? Ugh was so disappointed with who ended up being behind the whole thing.

All in all, Dreamer reminds me of a sci-fi novel meets YA. While I’m not in love with this book and I honestly don’t care as to what happens next I think the idea behind the book was a good one. Barrow from a friend material.

Thank you, Nicole Thomas for sending me a copy of your book!