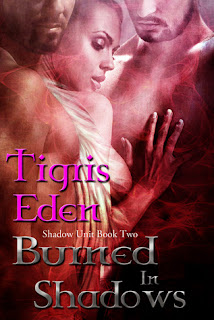 Blurb:
Royce Zarides has accepted his hand dealt by fate. He's loved and left far too many women. In the bedroom that is. But one kiss from Belinda Raine Ignis was all it took for his eyes to open. Is she really the woman meant for him and his brother Ronin? Or will history only repeat itself? That's the million dollar question he doesn't want to answer.

Ronin does not believe that Belinda is for him and his brother. But one night with her isn't enough. Even when he sees her for who and what she really is, Ronin still has a hard time expressing his emotions where Belinda is concerned, and time is running out now that she's to ascend to the status of Matria of the Phoenix Enclave.

Belinda (Bells) Ignis is good at ignoring men. She's had her share of heartache. Jilted at the altar by her first love, she's sworn all men off for good. Her mother and Matria of her community has other plans in mind, as well as the Zarides brothers. When faced with the heated glances of Ronin and the smooth tongue of Royce, what's a girl to do?

The clock is ticking down for certain members of the Shadow Unit. Draven assumed dead, leaves a sour taste in every ones mouth. Jes' new found abilities make for a great addition to the team. But when things seem to settle, they only get worse, as the team sets out to discover the origins of Mr. Black and the notorious Red Sun Organization. Secrets are uncovered and deals are made that result in a deadly blow to all involved.

My Review:
I received a copy of Burned In Shadows for an honest review.

Holy toaster cakes I am in love with twins. Two very old and powerful twins who can read minds, turn into terrible beasts, and bleed blue blood. I know sounds sexy right? They are super delicious and I was wishing many times I was Bells (Belinda), especially during the naughty parts.

I was first introduced to Royce, Ronin, and Bells in Enslaved in Shadows and I wasn’t sure what I was going to think of them in Burned in Shadows. I was in for a surprise because wow all three were truly amazing characters with their dark and deadly pasts and devotion to each other. The twins are intense and always intent on pleasing Bells which will make readers jealous because wow they are yummy.

A twist in this book happens as Mr. Black a.k.a. Draven have gone all dark side and can’t remember his past or his mate and child. When an attack at the Shadow Unit brings Jes face to face with her mate who attacks her and then leaves, the unit sets out to bring him home. Jes goes undercover and sets out to make her man remember who she is.

Burned in Shadows is an intense and fast paced sequel that definitely left me craving more. After I put down the finished book I immediately cried because the third books release date is seriously far away.

The characters are all amazing. Jes is such a strong no nonsense character in Burned in Shadows and she is no longer afraid of everything that happened in her past. I fell in love with her character all over again because while she kicked major butt in the last book she is even more awesome in this Shadow Unit Sequel. Draven/ Mr. Black was irritating and I just wanted to shake him because he’s supposed to be a good guy but he wasn’t but he was. So many conflicting feelings he had but I still loved him. I didn’t think I was going to like Ronin because in the first book he seemed so broody but he was fantastic and my favorite out of the twins. Royce definitely has a hidden dark side which would be scary to behold but he was a great and protective character and I loved that. I knew I would love Bells. She’s sassy and strong but still sensitive and likeable. All in all every character in the Shadow Unit series as amazingly relatable and well written and that made for a great read.

I cannot wait for the next book. I hope it comes soon. Tigris Eden made a masterpiece with the Shadow Unit series so far and I cannot wait to see what she will do next. You need to pick up this series if you already haven’t.

Favorite Quote:
"Even if the entire team found out Ronin enjoyed Despicable Me as much as Faith did, no one would say a word. They'd watched the movie at least a dozen times. She'd caught Ronin imitation Gru's voice." 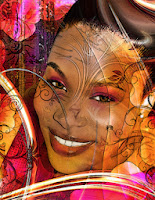 About the Author:
One of Tigris’ fondest memories, was in the sixth grade, when her teacher read her story, “The Case of The Missing Pepperoni”, out loud to the class. It was then she decided she wanted to be a writer when she grew up. But like all childhood dreams, reality has a way of crashing in and disrupting plans. But her imagination and the voices inside her head never stopped talking. Every dream she could remember was jotted down in her dream journals.