Review: A Shadow of Light 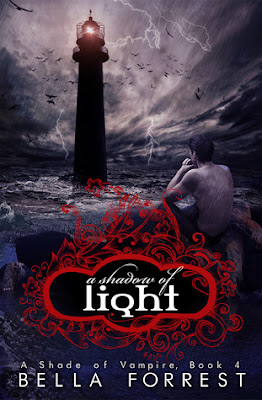 Blurb:
Since the implosion at The Oasis and Derek's stay at Hawk Headquarters, The Shade has fallen into a state of utter chaos. To make matters worse, the citizens of Derek's kingdom have become suspicious of his loyalties and accuse him of siding with the enemy... At a time when Derek desperately needs full cooperation from his subjects, they wish to put their own King on trial.

Meanwhile, Sofia is being held hostage by the hunters. They are determined to rid her of her infatuation with the vampire. She submits to the strict routine and training they impose on her, but the only fuel that keeps her going is the thought of reuniting with Derek - something Reuben is fighting with every fiber of his being to ensure will never happen.

...Until one day, out of the blue, Reuben appears to have a change of heart and comes to Sofia with a proposal; a solution that she never dreamed possible. A solution that would fulfil her heart's deepest desires and secure her and Derek's future together, forever.

But can she really trust this man who is so renowned for his hatred of vampires? Does she even have a choice?


My Review:
I received a copy of A Shadow of Light for an honest review.

War is on the horizon and Derek doesn’t know what to do now that he’s left Sofia in the hands of her father and the hunters. The darkness is calling to him, beckoning for him to fall down the dark pit that once proved so efficient. The only solace Derek has is hoping he made the right choice and keeping Sofia on his mind as often as her can hoping to be the man she would want him to be. The battle seems to be pointless when Sofia comes back to him with word of a cure. With war and the past demons making themselves known the Shades time is limited.

The Darkness:
Wow honestly I never fully understood the depths of the darkness Derek and the other vampires spoke of until this novel. It’s best explained by saying it’s like depression for humans except it can make you a murderer and rip someone’s heart out when it hits. Derek and his father talk about the darkness and it’s very easily one of the scariest things that could possibly happen to anyone.

Sofia and family:
We finally get the back story of Sofia’s parents and life. Is it sad that I felt next to no pity for Ingrid at all because she’s so manipulating and calculating even in her own thoughts? Kind of sad but I couldn’t bring myself to like her. Sofia’s father Adian I kind of liked but then he betrayed Sofia and all I could think was “butt head” even though I get what he was doing and why it still didn’t make it right.

Surprises:
A lot of people got their POV’s told in this one and I was ecstatic about that. I love multiple POV’s and while some times when authors do it they write in too many that was not the case with this book. I am dying to read all the characters POV at least once because they all have such great back stories and are all so vastly different it’s awesome. Also some people or vampires may or may not come back from the dead which rocked my world and some secrets are revealed about a certain human and two people finally come together after being apart for so long.

All in all this made of an amazing and enticing story and I couldn’t have loved it more. About to dive into book 5 and I recommend this book to people who believe in love and love vampire books as much as I do. Shade power!