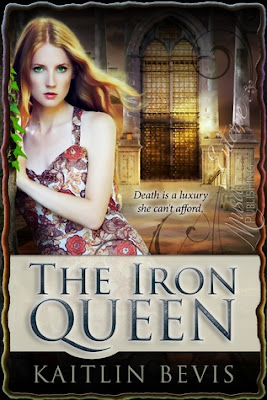 Blurb:
Life is hell for Persephone. Zeus will stop at nothing to gain access to the living realm and the Underworld, and as the only living god with a right to both, Persephone’s in trouble. Captured and tortured beyond the limits of her resolve, Persephone must find the power to stand against Zeus. But will she be strong enough?

Meanwhile, Hades contemplates desperate measures to rescue his queen. Persephone never thought of herself as dangerous, but there’s a reason gods never marry for love. A being with the power to destroy all of creation shouldn’t place more value in one individual than the rest of the planet. But Hades...Hades would break the world for her.

To save the world and stop both Hades and Zeus, Persephone must make a difficult choice. One that may cost her everything.


My Review:
I received a copy of The Iron Queen for an honest review.

Wow mind blown! A lot happened and I honestly am left wondering if there is going to be another book or not. If not what the bleep Kaitlin Bevis you cannot leave me hanging like this! Alright lets go over what happened:

Torture of the Godly kind:
Persephone is tortured to the brink of death. Insanity would be a blessing at many of the points of the book. Zeus has captured her and abuses and weakens both her mind and her body. She is pushed past her limits and is tortured for  days. It’s horrible and terrifying and many times she wished for death.

“The human body was never meant to survive prolonged exposure to lightning. While Zeus held me under a steady stream of electricity…”


“For a while it seemed as if life were pain. Like nothing else had ever existed or would ever exist, making hope feel like a distant memory. Then came that blessed moment when I stopped feeling altogether, no pain, no thoughts, no hope, nothing.”

Persephone doesn’t have the only POV in this one probably because the torture scenes like the ones I just pulled out would be sick to read chapter after chapter. Instead Hades and Aphrodite also get a POV which was pretty cool to have all three.

Aphrodite…gag:
I loathed Aphrodite mostly because she started the whole mess and the fact I could never trust her due to that fact. Aphrodite is shallow and self-centered but her perspective was definitely needed in the book to give the harsh reality of the situation without all the emotions. She only cared about herself and while that made me hate her it was helpful:

“How can you sit there and read”- her emphasis on the word made it clear how litter she thought of my reading material-“while she’s missing?”
I snapped the magazine closed and popped it on the wooden desk with enough force to stir ever paper within five feet. “Your moping is no more helpful. They aren’t going to find her any faster no matter what we do. So excuse me if I don’t want to die of boredom while Persephone’s gone.”

So yeah as I said hate her!

Hades is…still deliciously dangerous:
Hades and Persephone have bonded and they can feel each other feelings and hear each-others thoughts. Sadly that doesn’t help Persephone and when their connection is finally reestablished….well let’s just say that while it helps Persephone the revelation of what Zeus does will sicken you. Hades and Demeter (Persephone’s mom) are out looking for any and all of Zeus’ children so they can take Zeus down so Persephone doesn’t have to. Hades is protective and will do ANYTHING to get Persephone back from Zeus, even break the world. He is a major bad ass in this one and he definitely gets in on a lot of it in this book:

“I turned with a sigh, grabbing the gun out of the hunter’s hand before he could fire off a shot. Not that it would have hurt me more than a mosquito bite, but it would be damned uncomfortable, which made it at least as annoying.”

The tragic ending.. well maybe:
People died and while yes it was a war it was depression as could be. It was two characters you will grow to love but alas they die and you will cry…a lot. Then there’s the whole thing on I have no idea what will happen next and Persephone’s nightmares which are tragic. Sad sad sad and I need a book four in this series.

All in all:
Loved it a bunch and need another one. Persephone is definitely not the same character as she was and I loved all the growth she went through to get to the point where while she’s frightened she is still strong and caring at her core. Thank you, Kaitlin Bevis for creating such an amazing book and series and for being even more amazing by sending me a copy to read.

About the Author:
I spent my childhood curled up with a book, and a pen. If the ending didn’t agree with me, I rewrote it. I’ve always wanted to be a writer, and I spent high school and college learning everything I could so that one day I could achieve that goal. I graduated college with my BFA in English with a concentration in Creative Writing, and am pursuing my masters at the University of Georgia.
My young adult fiction novel “Persephone,” will be released this summer. I also write for Athens Parent Magazine, and truuconfessions.com. I have also published several short stories, my latest, Siren Song, is available on amazon.com.