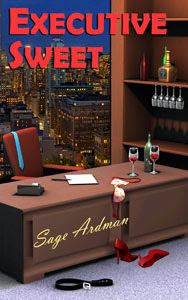 Kay’s partner in this game is Dan Avery, the handsome CEO of the company. The two of them might seem like a perfect match, but neither wants to get romantically involved. Dan has a history of bad relationships, and refuses to wreck the game by having another bitter breakup. Kay is wary of men, who always lust for her looks and never care about what’s inside. Besides, they’re both having too much fun manipulating unsuspecting businessmen.
But with all the sexually-charged business deals going on, how long can they keep the game going and stay out of trouble?

My Review:
I received a copy of Executive Sweet for an honest review.

Kay Samson is beautiful and smart a curse if there ever was one in her opinion. Kay is always looked at as an object but as soon as she opens her mouth men go running the other direction. Dan is looking for the killer college who can make him lots of money for the company by charming men into selling their souls. In between cheating rotten business men out of their money Dan and Kay find themselves entangled in each other while still balancing on the tight rope of nobody finding out what they’re doing to get all this money from these sexist business men.

I wanted to like this book but I had so many problems with it.
1. Kay did not seem like a real person to me. Her character and roles she played were so unrealistic to me it was hard to relate or even like her. I get people can be beautiful and smart and while that might intimidate some people did she ever consider she has bad taste in men. I have never met as many men that Kay has that are complete douches and yet every male Kay came across unless they were gay were douches and easily manipulated by a sexy woman. Dumb. Also I was incredibly sick of her “I’m so beautiful and intelligent” remarks ever few lines in the book I could honestly not find it in my heart to like or sympathize with her.
2. Dan was honestly not my favorite either although the better of the two he was just…bleh to me. He seemed like every other man in Kay’s man hating world except he wanted a smart woman. Eh he was nothing special.
The story line was original I just wish it was executed better but it just wasn’t there for me and that was a real let down on this books part.

I have to give this story a 1.5 bat rating because while the story line was original everything else fell short for me. I really wish this story had turned out better but it just wasn’t there for me.

I want to thank the author Sage Ardman for sending me a copy of her book. While I didn’t love it I am happy and thankful you gave me the opportunity to read your book.