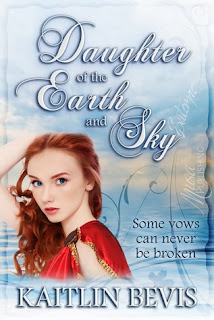 Blurb:
Some vows can never be broken.

Persephone thought she could go back to her normal life after returning from the Underworld. She was wrong.

The goddess Aphrodite is born among the waves with more charm than she can control. Zeus is stalking Persephone and her loved ones, and Thanatos is no longer content with Persephone’s silence.

He wants her soul.

Persephone can’t tell anyone about Thanatos’ betrayal, and it drives a wedge between her and Hades. Her mother is still keeping secrets, and Melissa’s jealousy of Aphrodite threatens to tear their friendship apart.

Alone, Persephone turns to a human boy for comfort. But will their relationship put him in danger? Sacrifices must be made, and Persephone must choose between her human life and her responsibilities as a goddess. If she doesn’t, she could lose them both. But will either life be worth choosing once Zeus is through with her?

My Review:
I received a copy of Daughter of Earth and Sky for an honest review.

Persephone’s life was supposed to go back to normal after she returned home from the Underworld. She couldn’t have been more wrong. Now Thantos has sent his reapers to torture her, her mother is still hiding things from her like the fact that she knew all along Zeus was alive, Hades and Persephone aren’t seeing eye to eye anymore on their relationship, her best friend no longer wants her around, Zeus is stalking her, and now Persephone has to figure out a way to take care of Aphrodite a demi-god with the power to charm Gods. All is not looking well and Persephone doesn’t know how much more she can take. When Hades finally figures out what’s going on with Thantos there was bigger problems, like the fact that Zeus has been hiding in plain sight all this time, and Persephone is missing large chunks of her memory. When everything is figured out it means war.

Wow I finished this book in about a day. All the suspense and drama and great characters really make this book such a fantastic read.

Persephone while going through a lot of issues I felt she was such a great character still even though she was stressed to the max. I couldn’t be frustrated with her because of her vow which yeah sucked in hind sight but Persephone fought with everything she could and I really loved her for that.

Hades was so fantastic in this novel with how protective of Persephone he was and just how well he took everything in stride even though he never knew the whole story. Kicking that Reapers butt was definitely one of my personal favorite scenes just because it was so Hades in that he cared so much about her.

Persephone’s best friend and pretty much every other character in this book really sucked money butt in this one. Her best friend only complained about how crappy her life was when she knew if she talked to Persephone about it she would help and she just treated Persephone like crap most of the book. Her mom was a total butt head in that she kept hiding things from Persephone that would have really helped her in the long run had she known what was going on. I hated Aphrodite throughout most of the book. I never felt bad for her and any sympathies towards her.

All in all this was a fantastic book with so many surprises and plot twists that it kept me on my toes while reading. I never knew what would happen next and that made for a great read. Kaitlin Bevis really outdid herself with this amazing series and I want to send a special thank you for sending me a copy of your book to review. Daughter of the Earth and Sky is a great YA book that deals with Greek mythology and is an all around great well rounded book. Go check it out.

I spent my childhood curled up with a book, and a pen. If the ending didn’t agree with me, I rewrote it. I’ve always wanted to be a writer, and I spent high school and college learning everything I could so that one day I could achieve that goal. I graduated college with my BFA in English with a concentration in Creative Writing, and am pursuing my masters at the University of Georgia.
My young adult fiction novel “Persephone,” will be released this summer. I also write for Athens Parent Magazine, and truuconfessions.com. I have also published several short stories, my latest, Siren Song, is available on amazon.com.