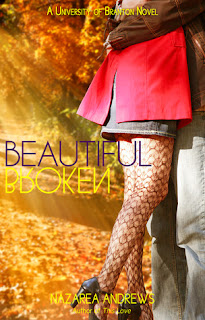 Blurb:
She's been broken by her past. He's been breaking for as long as he can remember.
Together, they can make each other whole--or destroy each other.


My Review:
I received a copy of Beautiful Broken for an honest review.

Scout Grimes has been running from her dark past with drugs and alcohol. When her brother and Dane his best friend sent her to rehab Scout had no choice but to clean up her act or risk Dane taking himself out of her life forever. Dane has many problems including his attraction to his best friends little sister Scout. When both come together they realize just how much they belong together, and despite their pasts and the obstacles ahead they’re willing to risk everything  to be together.

Sadly I didn’t enjoy this story as much as I did the first book in this series First Love for a couple of big reasons.

1. Scout: I honestly didn’t like her all that much. She complained to much and while I get what happened to her was horrible she’s still incredibly rude a lot of the time to everyone even when they’re nice to her. I just could not relate to her at all which sucked because many characters in different books who go through the same ordeal were more relatable to me but not Scout.
2. Dane and his always using sex as a way to cope with his emotions. I wasn’t a huge fan because honestly all that says to me is that he’s a man wh*re which took me liking him a lot down as well.
3. Atticus was such a bad person in this book which made me sad. I mean everyone expects him to drop everything for his druggy sister was annoying. I didn’t like how judgmental he was to Scout. Even though I wasn’t her biggest fan Scout didn’t deserve the harsh attitude that Atticus gave her most of the time.

The overall story of two kids who grow up together and become more than friends was definitely great. While I wasn’t a hug e fan of the characters in this one I really enjoyed the writing and the story line. Nazarea Andrews has an amazing talent and even with her “eh” characters her way of story-telling was so perfect to me.

About the Author:
Nazarea Andrews is an avid reader and tends to write the stories she wants to read. She loves chocolate and coffee almost as much as she loves books, but not quite as much as she loves her kids. She lives in south Georgia with her husband, daughters, and overgrown dog.