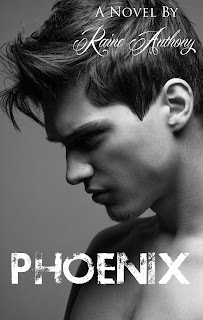 PHOENIX Synopsis:
In a small town in Cornwall, a fighter and a schoolteacher meet.
Dangerous. Bad News. Killer. This is what Phoenix sees when he looks in the mirror.
Shy. Timid. Afraid. This is what Eve sees in her own reflection.
But when Eve looks at Phoenix she sees a strong, handsome, sensual man. And when Phoenix looks at Eve he sees a beautiful, untouchable, heavenly creature. Together they will help each other to escape the labels they have lived with for so long.
Will the ghosts of their pasts return to hinder their happiness?
Or will true love lead to freedom?
Phoenix is a story of two lonely souls finding solace in one another’s hearts.


My Reviews:
I received a copy of Phoenix for an honest review.

When Eve moved into Cornwall it was to get away from her past. Eve wants to become a new person, a person not stunted by her brothers’ abuse. She finally gets that chance after her best and only friend passes away leaving Eve all of her money. Now teaching at a school as her friends last dying wish Eve plans to start fresh. Then she meets Phoenix who is nothing like she ever expected. Phoenix has a dark and dangerous path and doesn’t believe he deserves someone as innocent and loving as Eve. Soon though they become close friends and when they find out about each other’s pasts they both know they belong together.

Phoenix:
I was sad Phoenix only got two chapters in this book. I feel like I would have enjoyed it more from his perspective as well as Eves but what can you do. Phoenix has a dark dangerous past filled with death, abuse, drugs, rape. Escaping that life wasn’t easy but he sets himself apart from the town of Cornwall and starts up a new life. Phoenix is all around the protective but venerable hottie. He will protect Eve no matter what and he’s honestly an interesting character I would love to get read about and be able to get inside his head.

Eve:
Eve is fragile and broken when we first meet her. She loves music and poetry and sunlight. She’s socially awkward due to her past and always has great bouts of anxiety when she needs to go out and meet people in large quantities. She has a cute innocent mind and it’s a stark contrast to her lover Phoenix. She does end up finding strength and I think for me that’s what made her so great because I do enjoy character development.

Overall:
Phoenix is an interesting story that held a lot of promise. This is probably the only story I have ever read where the mundane life of the main character was enjoyable even when she wasn’t getting it on with Phoenix which was also pretty awesome. I enjoyed the writing style but I wished the book could have picked up a little more. I felt all the details were so drawn out sometimes when they didn’t need to be but it wasn’t horrible. I was sad when I only got Eve’s point of view. To sum up enjoyable, quick read with a happy ending with characters from broken pasts finding happiness in each other.

On my way home later on, I wheel my bicycle along and walk since the weather is nice. Daffodils blossom by the roadside and I pick one to bring home with me. I haven’t got a vase; it’ll be another day or so before the furniture arrives, but I’ll put it in a jar with some water, and it will be my one friend in the empty cottage.
I stop and visit the small grocery shop along the way and buy some food for dinner. When I continue my walk, swinging the daffodil loosely in one hand and with my plastic bag of groceries hanging on the handle bar of the bike, I forget that I am almost home and passing by the house that belongs to Phoenix.
I hear the faint sound of a door opening and loud steps walking down the path, but I’m in too much of a daydream to pay any notice. Before I know it I’m stopped suddenly in my tracks and a man is standing in front of me. When I look up, I recognise the shaggy yet neatly cut brown hair. His eyes are brown, too, almost black, and they burn into mine.
His brow is furrowed and his expression is hostile. In his hand I see a crumpled up piece of paper. Aggressively, he throws it to the ground at my feet and then storms away. I pick it up. It’s the poem.
I don’t say anything, but my cheeks quickly colour themselves bright red. Stumblingly, I hurry on to the cottage and shut the door behind me. I lean against the wooden frame, breathing heavily and telling myself never to try something like that again. The look in his eyes was chilling.


The problem is that there is something about Phoenix that really makes me want to try again, no matter the fear I felt from his gaze nor the prospect of a repeat rejection.

Author Bio:
Raine Anthony is the pen name of a British-born freelance writer. She is in her late twenties and has a number of successfully published novels under her belt. She likes pictures of birds. She is an avid reader with a love of laughter, a hatred of high heels and an indifference to a lot of things in between. Her romance novel, Phoenix, was written many years ago and almost forgotten. This year she decided give it life again by publishing it. She hopes that readers will enjoy the tale.
Links:
Facebook: https://www.facebook.com/pages/Raine-Anthony/528954313819835
Twitter: https://twitter.com/raine_anthony
Goodreads: http://www.goodreads.com/author/show/7210496.Raine_Anthony
Blog: http://raineanthony.blogspot.ie/
Posted by Reese's Reviews at 1:00 AM