Synopsis:
The Paranormal Uprising brought myth and legend out of the shadows and into real life. The war that followed tore the world apart. Two years after the Uprising, twenty-year-old Kendry is learning the hard way that the battle lines aren’t as clear-cut as human versus para. And the hard way means being hunted down by both human militants and para separatists. Trouble is, she has no idea why.

On the run with only her mysterious gargoyle guardian, Kendry knows that finding out why she’s on everyone’s most-wanted list will be no easy task. It means charging headlong into a war she’d hoped to avoid, and is woefully unprepared for. So when she realizes that everyone in her life has been lying to her, discovering that she’s somehow the key to ending the war is the last thing she needs. With both sides tearing up the world to find her, it’s decision time for Kendry—keep running, or stand up and fight.

My Review:
I received a copy of Parawars for an honest review.

Kendry’s world is filled my almost every supernatural being known and not known to man and for a long time they stayed hidden. When the paranormals finally came out to the humans a war began and has continued to wage on. When the war comes to Kendry’s town and takes her mother with humans and paras alike Kendry and her best and only friend Axel team up with who’s left to save them. What starts as a rescue mission turns Kendry’s world upside down as secrets about who she truly is or what she could be are brought into the light and she finds out her father isn’t dead after all. With secrets and evil lurking behind every corner of Kendry’s new home Kendry and her friends become closer and closer and all the more determined to put an end to the raging war between the humans and the paras. The war it seems has a long way to go until it gets better and Axel and Kendry must also find out if their feelings for each other are worth the risk.

Gargoyle Hotness:
Wow first off hottie gargoyle who can kicks major ars, has an accent, and is so swoon worthy its awesome. While many times in the book he tries to ignore his feelings for Kendry I am so happy when he stopped holding back. He is definitely passionate about well everything he does and was such a match for Kendry that I couldn’t help but love him too.

Strong Female Protagonist:
Just the way I like them. Kendry is an awesome character to read about. Kendry is passionate and she will do and give everything of herself for the ones she loves. She proves this time and time again when she almost gets herself killed and gives up her mortality to save her family. Pretty freaking awesome I think. She also has a great sense of humor and an all-out honesty about her that just made her a great character to read about.

Unique and Original Worlds:
To say the world of Parawars is original and amazing is an understatement. What Caitlin Greer created in the pages of Parawars is nothing short of magic and I loved every second of it. There’s magic, major kick butt fight scenes, supernatural creatures raging from Odin to Minotaur’s to Gargoyles to Herne and The Wild Hunt. A-freaking-mazing to say the least and I could barely tear myself away from the pages of this amazing book.

Where’s the Second:
I need the second book like now so Caitlin Greer just so you know you need to get on that because I am seriously dying to know what will happen next to Kendry and Axel especially after that ending! Just saying pure torture!

All in all:
Fantastical in all its unique and amazing glory. I will definitely be reading the second book and I cannot wait. I hope everyone can check this awesome book out because it is definitely worth it. 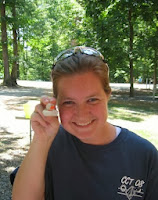 Author Bio:
Cait writes YA and NA stories that range from sci-fi and fantasy (because she loves making worlds and things up), to contemporary (because she kind of sort of fell into it and discovered she’s not half bad). Her best friends growing up were the combined works of Robin McKinley, Madeline L'Engle, Anne McCaffrey, Andre Norton, and too many others to mention.

She drives a Jeep, loves the outdoors, takes pictures of everything she can, and writes obsessively. A martial artist and a former teacher, Cait is owned by two cats who started out incredibly small, and are now incredibly huge.

She currently live in Utah, but Virginia will always be home.