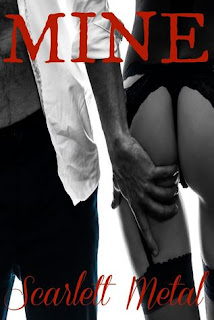 
Blurb:
Alexandra opened her heart and let herself be vulnerable to Paul. The walls around Paul's heart were torn down by the feisty Alex. Both of them are happier than they've been in a long time.

Paul's ex-wife comes to town and turns their life upside down with news that shakes Paul to the core, making him question everything he's ever done. Will Alex be reminded of why she’s never trusted anyone and leave? Can Paul show Alex that she's the only one for him before it's too late? Or will someone else from their past destroy them beyond repair?

Alexandra and Paul are doing great now that the drama with her ex-Dom is over. They’re both running the club together with Alex doing all of the P.R.ing for the club and Paul running it with his best friend. They still have a great sex life with Alex now wearing Paul’s collar. Things couldn’t be more perfect. That is until Paul’s ex-wife shows up wanting him back and willing to do anything for it, even kill. When Jessica Paul’s ex shows up at the house with a gun the consequences are almost fatal and even if Alex gets out of the situation with Jessica alive will she be safe because someone is after her and will do anything and everything he can to get her back and it’s not Paul.

Wow:
For such a short story “Mine” was packed high with emotions and action from the first pages. In the few pages “Mine” had Dom and sub sex, crazy ex’s, a shooting, and threats. Who would have thought such a short novel would have so much in it? Not me. So happy Scarlett Metal decided to continue this series and I cannot wait for the next installment in this awesome and sexy series.

Overall:
Holy toast I seriously recommend this amazing series to anyone looking for hot sexy scenes with well-rounded relatable characters, and surprises with every page turn then the Naughty Girl Series is definitely something you should be picking up like NOW. Scarlett Metal definitely weaves an intricate story that will leave you wanting more with her amazing writing and amazing story-telling.