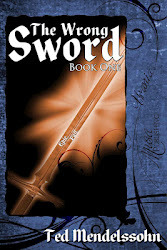 
Blurb:
Ever since he arrived in Paris, Henry the Rat has made a pretty good living selling "magic" swords to gullible knights. But when Henry sells one to Geoffrey Plantagenet, brother to King Richard, his happy days are over for good. Geoffrey forces Henry into a dangerous, uncomfortable quest for the most famous magic sword of all time, Excalibur, even though Henry is certain that it's just a myth.

Then Henry actually finds Excalibur - and his troubles really start: For Excalibur is not just the sword of heroes...it’s also the sword that won’t SHUT UP. It communicates with its owner, it knows what kind of owner it deserves, and Henry doesn’t even come close.

To keep Excalibur and the world safe from the appalling Geoffrey, Henry will have to masquerade as a knight, crash a royal wedding, rescue a princess, break a siege, penetrate the secrets of the Perilous Brotherhood, and find Excalibur’s rightful bearer, all while trying to reach an accommodation with a snotty, aristocratic hunk of steel that mocks him, takes over his body, and keeps trying to turn him into the one thing he hates most...a hero.


My Review:
I received a copy of The Wrong Sword for an honest review.


Henry the Rat has been living in Paris as a con artist thief for a long time. After selling their latest sword Henry thinks he’ll be set for a long time. Too bad he sold the fake sword to Geoffrey Plantagenet who offers Henry a deal. He helps him find the sword Excalibur and Geoffrey will let Henry and his friends live. So off Henry goes to try and save his skin except when he finds the wrong it won’t shut up and gets him into even more trouble. Now Henry is on a mission to save all of his close friends from Geoffrey and find a suitable knight for the noble but annoying sword Excalibur.

This review is going to be short because I don’t have too much to say about the story of Thw Wrong Sword. I gave the story a two star rating because I honestly could not get into this book at all. There was never a part of The Wrong Sword where I was finally interested in what was going on with the story or the characters and every time I had to go back and pick this story up I was dreading it. Now mind you this is personal preference and I am sure many people love Henry’s story with Excalibur but I was just not one of them.

The Wrong Sword is very action packed; there are murders, fights, wars, and a tiny love story that goes with this book. Henry is very cunning and while the sword and Henry fight and argue a lot their bond is almost unbreakable. Ted Mendelssohn wrote a very intricate story where thieves can become knights and swords can be extremely annoying.

All in all if you’re looking for a story with magic swords and lands of King Arthur are mythical and twisted then this is the book for you.