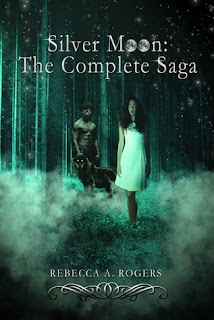 Book Description:
Join Alaric, Ulric, and Daciana in ALPHA MOON as they discover there’s more to life in the 1500s than plowing fields and attending balls. A powerful witch, who practices black magic, won’t hesitate to place a curse upon them—one that will have them howling at the silvery moon.

In SILVER MOON, Candra Lowell is sent to live with her aunt and uncle in presentday Connecticut. She thinks it’s because she’s a troublemaker, but Candra’s parents only shipped her off for one reason: to learn how to become a werewolf. She’ll learn there’s more to the story, though, when a rival pack has their hearts set on making her visit a living hell.

The past and the present merge into one in BLACK MOON as Candra falls even harder for her star-crossed lover, Benjamin Conway, who also happens to be her enemy, and wrestles with the fact that she has awakened an ancient soul inside her body. Can she stretch her newfound claws in peace, or will she wish she had never become a werewolf?

In the final instalment of the saga, BLOOD MOON, Candra and Ben travel back to the sixteenth century, where they’ll embark on their toughest journey yet—stopping Alaric and breaking the curse which started it all. But if ending the werewolf curse, and the powers that come with it, means Candra and Ben will be stuck in the sixteenth century, can they live with the fact that they’ll never return home and see their families again?

My Review:
I received a copy of The Silver Moon Saga for an honest review.

Wow. I really enjoyed reading the whole series at one time. Reading the before story and then going on to present time to Candra’s story about her discovery of her being a werewolf along with everyone in her family. She also discovers a rivalry between her family and another family the Conway’s who we learn about in the prequel. I don’t want to give too much away but I will say the writing is great and so are the characters. The characters while living in world where werewolf families are easily relatable and I think that made this story all the better. Candra gets sent to her Aunt and Uncles after getting in trouble and continuously cutting class. There’s also a love interest Ben whose family is rival to her own and definitely causes problems throughout the series which made for lots of drama. Ben is definitely a swoon worthy guy and totally get why Candra falls for him. The ending is amazing and I was extremely happy with how it ended. I would suggest everyone read this series.

The whole series takes loads of interesting turns that are so unexpected it kept me interested throughout the entire book. Reading about Candra as the main character was definitely not hard as she had an amazing voice and was never difficult to understand as a character.

All in all I would suggest this saga to anyone who loves forbidden love, great writing, relatable characters and werewolves.

Rebecca expressed her creative side at an early age and hasn’t stopped since. She won’t hesitate to tell you that she lives inside her imagination, and it’s better than reality. In short: I’d insert something here along the lines of living in the Northeast or Europe with my wonderful husband and our dogs, but these things haven’t happened yet. Instead, I’ll tell you I’m an avid gamer, chocoholic, coffee addict, animal lover, and own way too many books and shoes.