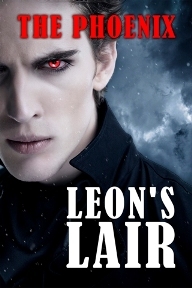 Today is the much awaited release day for Leon's Lair by The Phoenix!
Here's a little bit about what the book is about:
What would you do if you thought you had escaped only to find you are caught in LEON'S LAIR?
This international thriller/contemporary fantasy is a nail-biting ride that is grisly but somewhat tongue-in-cheek, a brutal tale of horror and the occult that doesn't take itself too seriously. It includes romance, continental adventure, action, suspense, and dozens of vivid characters from around the world.
The adventure starts with The Jakarta, an elegant cruise ship sailing the exotic seas in Indonesia with a passenger list of ninety unsuspecting people. Jane and her best friend, Remy, are just getting to know the rest of the small group of young twenty-somethings when the ship is attacked by pirates. However, Leon and his band are not your usual pirates – they want something else.
Jane and two male companions escape the horror, fleeing in a lifeboat. In their flight to escape Leon and his men, they become lost at sea for weeks, are out of water, and have nearly lost hope of ever finding rescue when they finally catch sight of land, a dangerous rainforested island that seems deserted. However, their fight for survival has only just begun.
They are not alone.
Fate is cruel because this island is Leon's Lair.

Character Interviews
Jane O'Doherty
Tell us about yourself, Jane.
"Me, well. I'm twenty-two. I just graduated from Boston University. This cruise in Indonesia is a present from my parents. I thought it would be great to see some exotic ports of call, you know? Before deciding exactly how to apply my education. I studied in the field of biological research and forensics, with a specialty in toxicology. I was going to go into medicine. Be a doctor. But I got hooked on biology and became interested in forensic chemistry. I guess crime-solving runs in my family. My dad and my grandfather are both retired cops. My dad is Irish and my mother is Russian. I'm a workaholic. Terribly serious. And don't sleep much. I live behind my parents' house in a little cottage. I'm always rescuing animals, much to my mother's distress. I have two dogs, four cats, a parrot, and a three-legged squirrel. And of course, to make this trip, I had to hire someone to take care of my menagerie. I'm a vegetarian, but I hate broccoli. Boom! There. Now you know everything about me.


Peter Sorenson
Tell us about yourself, Peter. "I’ve spent a lot of time backpacking, hunting, rock climbing, and that sort of thing. I am mostly a loner. I just graduated from college, and want to work for National Geographic as a writer/photographer, but they turned me down. I'm on this cruise to get some photos of Indonesia. With the photos and an article, maybe they will be impressed and give me a chance. Probably won't work though. I'm pretty much a loser. I also wanted to publish novels. I've written three, but agents keep rejecting my queries. I'm completely attracted to Jane, but I can't approach her. Why would a girl like that want a guy like me? I have the personality of an old gym sock."
Obviously, Peter has lost all confidence in himself. He is shy, kind of geeky, and isn't good at social interaction. However, extreme danger sometimes brings out a person's real character. Peter is the hero in our story.


Wolfgang (Wolf) Ulrich
So Wolf, I hear you are a talented and very powerful wizard. And you're in love with Remy. How is that working out?
"I said good-bye to Remy with a promise to call her, but then I thought, What am I thinking? I can’t be part of her world; it's forbidden!
"To my own surprise, my mouth had opened, and the words just tumbled out. I saw her thoughts, and she was smitten with me. And I was completely drawn to her."
Oh, hell!
"My strong attraction to Remy was immediate, and it now landed me with a terrible problem.
"It had been hard enough for me to admit to myself that I didn't like my fiancée. I had never even bedded the woman. She just turned me off. Finally, a year ago I had come to terms with it. Colette was a snotty, self-centered, French brat. I didn't like her. However, I had decided that not liking her was my problem to deal with and mine alone, because it was a matter of family honor to follow through. A marriage with Colette had been planned from the time we both were born. My father would be in a rage if I said I was interested in another woman.
"I was being heavily pressured by both families to set a wedding date. I kept stalling. The plan between the two powerful families had been to cement the German and French lines to ensure our European existence as influential mages. I couldn't just think about my own desires. I am dedicated to the power of the magic world."
I just have to break this off with Remy …
"Besides my family commitments, I am not allowed to be involved with a nonparanormal. Breaking that rule had severe penalties, not only with the Association but also with the International Council of the Mage. And rule number one: never let normals see you perform magic. How could I hide that from her?
No, I just won't call her back. That's what I'll do.
"I would just stay hidden while I was on an assignment to watch Peter, Jane, and Remy. I felt like we were using them as bait, because we had a feeling Leon would come after them. It could be our chance to catch him, but I also had to make sure I protected them from harm."

Remy Madison
Tell us what happened, Remy.
"Well, we were in a pizza parlor when Jane and I were descended on by the paparazzi, and who showed up out of nowhere? Wolfgang! I mean, we met him on the plane coming home from Indonesia. What a gorgeous man! He asked me for my phone number, but never called. And now here he was grabbing our hands and helping us escape from the press. Instead of going out the back door, he had us duck into the bathroom. He locked the door.
I gazed around the small room. “We're trapped in here. There’s not even a window to crawl out of." I stabbed Wolfgang in the chest with my index finger. "And what are you doing here?"
There was a great deal of jostling and yelling outside the restroom door for about thirty seconds, and then the sound of the back door slamming.
"Can we talk about that later?" he said. "Look at Jane."
I turned to her in the confined space. Jane looked like she was in the middle of a horrible nightmare and couldn't wake up. Her eyes were closed, and she was tossing her head back and forth, violently shaking.
"Jane, what’s wrong? You’ve seen those press jerks before." I shook her.
Jane suddenly let out a bloodcurdling scream, backed up, slammed against the bathroom wall, and slid down with her hands covering her face.
"He was so beautiful and so pathetic, and I killed him. I had to kill him. I had to kill him. Now he's here. He's here! I saw him!"
Wolfgang said, "Jane! Who's here? Jane, who?"
"Leon!"
Then there was a tap on the door.
"Jane, I know you’re in there. I can feel you."
There was a pause.
"I know it was Peter who made you do that to me. I forgive you. Come out, and I’ll take you away from all these cretins, and we can share my empire."
"We’re screwed," I whispered.
Wolfgang grabbed me and Jane around the waist and slammed us into his chest. Suddenly all was black whirling space, and just as suddenly we were standing in the garage at the farm.
"Don’t ask right now; the story is too long to tell," Wolf said, holding both hands in front of himself before either of the us could close our slack jaws to talk.
"And for god’s sake, don’t say anything to anyone else. Do not say how you got here. Do you understand?"
We stared at him and slowly nodded our heads in unison.
"Go back to the house, and tell everyone that Leon is alive and that the press has found you. Don’t come out of the house. I am going to make different arrangements to make you safe, but it will take some time. Do you understand that?"
We again nodded in unison.
He gave us a little push toward the garage side door, and we started walking. I turned to ask a question, but he was gone.
"Well," I said in a flat, faraway voice, "that was interesting." I turned back to Jane. "Don’t you think so?"
Jane looked at me. "Did I just forget about a car ride back from town, or did we just break every law of physics?"

Hello. We are Lee and Gary Jordan, and we are THE PHOENIX.
We are passionate readers, reading many different genres. As a writer team, we don't intend to go with custom and stick to one genre. We have several novels in the works.
We enjoy getting to know readers and other authors via the Internet, love movies, and sitting outside to soak up the Southern California sun. We live in Hollywood with our crabby tomcat, Snickers.
Lee wrote A Whisper from Eden. She loves researching and is never content with the way things are explained, and likes looking into the nooks and crannies and wondering, what if?
Gary is a third generation Californian, born and raised in Anaheim. He has always had an insatiable curiosity about everything. He was involved with telecommunications for many years and now has his own business. He has always been a happy, laidback person. But now he has something to be very intense about.
Lee invited him to help her with a paranormal thriller she had in mind, and once he sat down at the computer and started, his life transformed. He found his real passion – writing fiction. He has never been so excited to do something in his entire life.
Both of us feel it is never too late to change the direction of your life.

From Gary to Lee: Well, we are a great team. I love all those brainstorming sessions. Amazing! I want to thank you for being my lover, my confidante, my best friend, and for your dedication to the craft of writing. You are so much fun and so sweet – most of the time.
It's just, I wish you weren't such a crab sometimes. Let's be honest – you nag.

From Lee to Gary: I want to thank you for being your loving, honest, ethical, and wonderful self. And I want to thank you for being my one true soul mate and for sharing with me your wonderful talent. It is truly a joyful experience co-writing with you.
I'll tell you what makes me crabby. You have been so caught up in writing our current novel, you keep forgetting to eat or sleep. Well, okay, I know. Writing this novel is so exciting, and I've been doing the same thing. I know, I know. Right now it's 5:00 a.m. Okay, I know I haven't eaten since yesterday at lunch. Oh well, to hell with it.