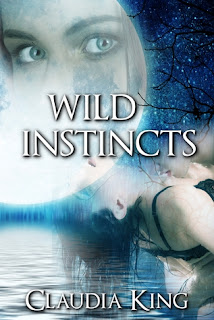 Book Description:
Every werewolf has an instinct. Lyssa's is to submit.
While the human part of Lyssa rebels against the iron fist of her domineering alpha, the wolf in her is unable to resist his every advance. Caught between the primal draw of her instincts and her desire for independence, she finds comfort in the company of Hawthorne, another wolf living on the outskirts of the pack hierarchy. But as Lyssa's attraction to Hawthorne grows, she realizes that his instinct may prove to be even more dangerous than her own.

My Review:
Plot:
Lyssa used to have a normal life. She had a family, friends, and a home. That was taken away from her the night she was bitten by a wolf and turned into a werewolf.

Now she’s living in a pack and her instinct is a daily struggle since her alpha constantly exploits her instinct to make her obey him. Lyssa loathes her alpha but her wolf can’t stop herself from giving into him when her instinct hits.

After another night with her alpha she tries to escape the confines of her pack for a little while only to discover that she’s not alone after all. She meets a wolf in her pack named Hawthorn whose instinct has him isolated and at the bottom of the packs food chain, just like Lyssa.

POV:
Lyssa sadly is the only perspective we get in this book, most likely due to the fact the book is so short.

Characters:
Lyssa: she’s the main character in this story and while she’s a strong character when her human is in charge her wolf makes her weak since she has to give into it. She hates her instinct and the things it has her doing. The constant back and forth between her wolf instinct and her human side definitely added to an amazing dynamic.

Hawthorne: He’s not in the story too much but I can tell he’s going to be a prominent character in the upcoming stories. From what the story has told so far though Hawthorne definitely has some issues to work out but is really sweet.

Cyan: he’s a real piece of work. It seems like no one in the pack respects him and he seems to exploit peoples weaknesses to get what he wants. Overall? Ars hat.

Overall:
I really wish there was more of this story. I feel that because the story is so short it doesn’t give all the detail and dialect a good story should have. I feel like the writing was super great and so were the characters. I wish there was dual point of views from Lyssa and another character since you know how I like dual perspectives. I think the story was really compelling and I can’t wait to read the next installments.