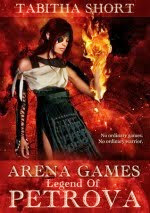 Book Description:
Petrova the Pummeler is the warrior of all warriors, the master of the mystical orbs, until a fateful match leaves her damaged and unable to continue fighting as a warrior. Now she must take her place as a master in the Arena Games and train her own students to become Arena Warriors.

Along the way there are obstacles: A band of thieves and murderers, a journey through the gypsy magicked Wood of Gibbald, a little girl with many life-altering secrets, and dozens of competing warriors.

Arena Games: Legend of Petrova is a story about friendship, love, revenge, and betrayal.


My Review:
I received a copy of Arena Games: Legend of Petrova for an honest review.

Petrova is an Arena Games legend. Having fought in 52 games as a warrior she has lost few battles. Her next battle though is to the death and both warriors will do anything to win. When the battle begins it’s over quickly with two rare warrior orbs and the sky begins to rain fire. Waking up from the games Petrova believes she is dead for she has lost her sight. When her master shows up and gives her a potion the one eye she still has begins to see again. With one eye Petrova has lost her warrior-ship in the games and seeks to become a master. With the odds against her she finds a suitable warrior and begins training and a year later her warrior dies in her first battle. Now Petrova must search for her next warrior who happens to be her sisters soon to be love and face her own demons.

Un-relatable Characters:
None of the characters were relatable to me. The world was fine except I had no idea what century or where they were located which is sometimes fine but I don’t know this book just seemed to lack a focal point. Petrova is rude and harsh and while I understand that’s from her training all through the book she never becomes softer really and she is hard to like.

What’s the point?:
*Sigh* I am not going to be harsh but here’s the thing I didn’t understand the point of this book, like at all. The whole story seemed to go in a circle:  Petrova injured, wallow, journey, train, warrior student dies, wallow, journey, train, warrior student injured, wallow, journey to self-discovery, train and then nothing.
Generally when reading I go: “Oh okay this book is about getting how bullying in high school isn’t going to last forever or to find love in ones’ self.” Arena Games: Legend of Petrova had no such moment for me and I think that’s because the book went nowhere and the characters had no growth.

Unnecessary Romance:
I honestly felt as if the romance between Miteous and Klara was so dumb. Klara all of a sudden has this insane insight onto the future and it was with Miteous which now makes sense why he had a pov in the story at all but it just came out of nowhere and then almost days of meeting they declare their undying love for each other. Who freaking cares? I mean seriously if the story is about Petrova why would I care about Klara and Miteous who do nothing for the story? I just felt as if both their romance and their characters were unnecessary for the story.

Creative Worlds:
I think the world of magic, battles, and deranged but wonderful dark and gypsy infested woods made for a great world and Tabitha Short definitely did a great job with that.

After Reading Thoughts:
The writer Tabitha Short did a great job at creating a magical world where darkness and hardship reins and no character was safe. While I wasn’t a fan of the characters or the overall writing style I think the story line was really what kept me reading if nothing else. I think many readers will and do like the story of Petrova but it just wasn’t for me. Thank you to the author for supplying me with a copy of this story.
Read Excerpt! 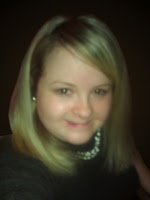 Author:
Tabitha Short is best known for her young adult mystery book Her Sister's Murderer. The book was released in November of 2012 and held various ranks on the iTunes book charts until December, when it reached #8, making it an iTunes bestseller. Because of the story's success, Ms. Short has decided to expand by making it into a series. The second book will be titled Finding Cassie. You can purchase Her Sister's Murderer in print by visiting the Novels tab on this website, or by finding it on amazon.com. You can purchase it as an ebook on all major etailers of ebooks including amazon.com, iTunes.com, barnesandnoble.com, diesel-ebooks.com, kobo.com, sony.com, and lulu.com.

Ms. Short is also the author of the young adult fantasy book Arena Games: Legend of Petrova. The book was released April 15, 2013 and has quickly gained a following. The second book of this series is underway and does not have a release date yet. It will be subtitled Legend of Virtos. You can purchase Arena Games: Legend of Petrova in print by visiting the Novels tab on this website, or by finding it on amazon.com. You can purchase it as an ebook on all major etailers of ebooks including amazon.com, iTunes.com, barnesandnoble.com, diesel-ebooks.com, kobo.com, sony.com, and lulu.com.