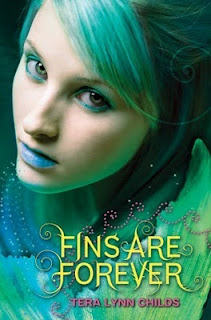 Book Info:
Title: Fins Are Forever
Series: Fins #2
Edition: Hardcover
262 pages
Published by HarperCollins Children's Books
Release Date: June 28th 2011
Add to Goodreads
To Buy: Amazon, B&N
Book Description:
On Lily Sanderson’s eighteenth birthday she’ll become just a girl—still a mergirl, true, but signing the renunciation will ink Princess Waterlily of Thalassinia out of existence. That leaves plain old Lily living on land, dating the boy she loves, and trying to master this being-human thing once and for all.

Now that Lily and Quince are together, mer bond or not, she’s almost content to give up her place in the royal succession of Thalassinia. But just when she thinks she has everything figured out, the waves start to get rough. Lily’s father sends a certain whirlpool-stirring cousin to stay with her on land. What did Doe do to get herself exiled from Thalassinia and stuck in terraped form, when everyone knows how much she hates humans? And why why why is she batting her eyelashes at Lily’s former crush, Brody?

The seafoam on the raging surf comes when a merboy from Lily’s past shows up—Tellin asks Lily for something that clouds her view of the horizon. There’s a future with Quince on land, her loyalty to the kingdom in the sea, and Lily tossing on the waves in the middle. Will she find a way to reconcile her love, her duty, and her own dreams?


My Review:
Lily Sanderson has finally found the person she wants to be with forever, Quince the boy next door. Their relationship couldn’t be any more perfect now that Lily has decided to give up the thrown and decided to live on land. The only problem Lily has is forging a new life for herself with the (SAT) looming over her and she doesn’t feel the least bit prepared with her grades. On a seemingly normal day Lily’s school experiences an earthquake and then Lily’s annoying cousin Doe shows up at her door claiming she has next to no mer powers and must learn to get over her hatred of humans or she will never return to Thalassinia. Attending school with Doe seems like a nightmare that continues to get worse and worse, starting with Doe and Lily’s old crush Brody hitting it off and Brody getting a kiss from Doe. Now Lily must take Brody back to get the separation but gets an unexpected visit from an old friend Tellin who purposes that they bond before she stops being princess and helps him save his castle and the oceans. While Lily molls over the idea Tellin tells Quince that Lily was going to give up the crown for him and leaves Lily. Now Lily must face the (SAT), and figuring out her future all on her own and when the time comes to make her decision on her birthday Lily isn’t sure who will be standing with her.

Oh my goodness I seriously love Tera Lynn Childs writing! I was such a skeptic about this series but after I started I seriously couldn’t put this book down for a second. I loved how much Lily grew in Forgive My Fins and it shows in Fins Are Forever I think. While she’s still flawed I believe that’s another part of her that makes her so relatable. Lily deals with a lot in this book such as her relationship with Quince that while most of the book is perfect takes a turn for the worst, college, scholarships, and you know the pains of the future as well as family duties. While Lily may be a mer princess with an awesomsauce destiny her problems are extremely relatable. I have to say that all of Lily’s problems as well as her as a character are really what make the Fins Series or trilogy so amazing.

The one main problem I had with this story besides some of the predictability about Brody and Doe was that Quince was barely in this book. Even when Quince was angry or kissing Lily he was not really in this story and while I get that their romance wasn’t the main part of this story I felt he should have been more in Fins Are Forever considering he was the reason Lily was giving up her position for him. While it’s not a major problem in the story I felt Quince should have been in there.

All in all, I loved the second installment of Fins Are Forever and I know I will be reading the third book as soon as I am able. I can’t wait! I really enjoy Tera Lynn Childs writing and know she will be an author I will be reading more from. I would recommend this series to anyone who loves the YA (Young Adult) Genre and I hope everyone can check this amazing series out soon! 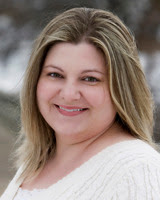 About the Author:
Tera Lynn Childs is the award-winning author of the mythology-based OH. MY. GODS. and GODDESS BOOT CAMP, the mermaid tales FORGIVE MY FINS, FINS ARE FOREVER, and JUST FOR FINS (July 3rd, 2012), and a new trilogy about monster-hunting descendants of Medusa beginning with SWEET VENOM and SWEET SHADOWS (September 4, 2012). Tera lives nowhere in particular and spends her time writing wherever she can find a comfy chair and a steady stream of caffeinated beverages.