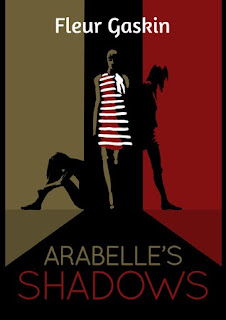 
Book Description:
Everything in Arabelle's life is coming together. She has confidence, great friends, she's even dating Naak, a wealthy Thai socialite. But there are too many models in Bangkok. Arabelle’s broke, she can’t find an agent in New York, and Naak isn’t as wonderful as he first appears.

Slowly the Shadows creep back into Arabelle’s mind, bringing with them thoughts of hopelessness and despair. The vile Shadows know something Arabelle’s refusing to remember and, if she’s not careful, they’ll use it to destroy her.

Based on a true story, Arabelle’s Shadows takes us on a journey through the struggles of growing up, not quite making it as an international model, and attempting to overcome a crushing depression.


I received a copy of Arabelle's Shadow's for an honest review.

Arabelle’s Shadows is about the life of a young model who suffers from depression. Throughout the story Fleur Gaskin paints the detailed picture of Arabelle’s life through journal entries. Arabelle deals with depression throughout the entire book and many times has things called shadows that leave Arabelle in a constant state of depression. Arabelle goes a couple years into the modeling industry trying to make friends, and make it big. However, lots of things get in the way of Arabelle making her goal to become famous such as her look and her agency. The constant struggles of the people Arabelle associates with, drugs, lack of work, family problems, and depression make everyday life a living hell for Arabelle. The shadows of doubt and low self-esteem always hit Arabelle and make her shut down for days at a time. In the end she realizes she never could achieve what she wants to do with the career she had been aspiring to do all those years and decides to pave a new life.

Arabelle’s Shadows for me was an interesting read in that being a psychology major it painted the picture more accurately of depression than a text book. The entire story showed the day to day struggles of modeling which wasn’t a total surprise to me but definitely showed a side not many people think about when the image of modeling pops up in their heads. Fleur Gaskin certainly opened up my eyes into the world of modeling that was so detailed it seemed the author had lived this life herself.

A couple issues I had with the book were the flashbacks and the length. At some points in Arabelle’s journals she would have flashbacks of her old life and some of them were extremely jumbled. Also when the journal would cut to the past and then current time then back to the past I got lost with exactly when and where Arabelle was. Another thing was the length, I felt Arabelle’s Shadows was extremely lengthy and I don’t think it needed to be. A lot of the story was on repeat of interactions and daily things that I didn’t think really needed to be in there.

Overall, Arabelle’s Shadows is definitely and eye opening story about a girls struggles in the modeling industry and depression. The story is definitely not for everyone but for some people I think they will enjoy it a lot. While in the end I found the whole story a true dedication to the struggles of depression I also found the story unmemorable. Fleur Gaskin definitely has an amazingly detailed writing style which I don’t generally go for but at some points was perfectly okay with.

About the Author:
Fleur Gaskin is from New Zealand. She was an international model for six years, working in over ten countries, mainly in Asia and Europe. She has been in TV commercials, walked on runways and appeared in many magazines including Elle, Marie Claire and Vogue.
She presently lives in Shanghai, China with her fiance.

Friend on Goodreads
Check out her website
Posted by Reese's Reviews at 1:01 AM