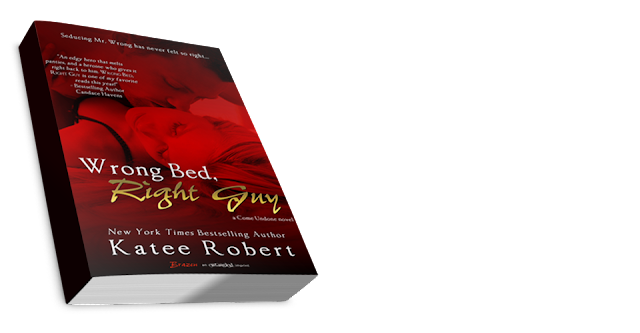 Prim and proper art gallery coordinator Elle Walser is no good at seducing men. Heck, she’s been throwing hints at her boss for months, but he’s completely clueless. Desperate to escape her mother’s matchmaking efforts, she comes up with a plan—buy some lingerie and climb into her boss’s bed. The plan goes brilliantly…until she accidentally seduces a sexy stranger instead.

Bad boy nightclub mogul Gabe Schultz just had the best almost-sex of his life. Too bad the smoking hot blonde thought he was his brother and bolted before he could finish what they started. Though her holier-than-thou attitude puts a serious damper on his mood, Gabe’s never been one to give up on something he wants. And he wants Elle. But does a man who lives on the dark side really have a chance with a proper lady?

When Elle Walser got the idea to seduce her boss by crawling into bed with him she had no idea what she was getting into. Waking up to a sexy girl all over him was not what Gabe Schultz expected when he came to spend the night at his brothers studio, neither is her running away from him when she realizes he’s not his brother. Meeting a woman like her was like nothing he experienced before and now that he’s had a taste he wants more and he won’t stop until he gets it. Elle is completely mortified by the fact her plan went totally south, but now she can’t get the sexy stranger out of her head even more so when he barges into her job at the studio and demands a date and tells her that he’s Nathan, he bosses brother. Gabe is everything Elle wanted and everything she believes she shouldn’t have, but the more time they spend together the more they begin to realize they may just be made for each other despite their differences.

I have been reading review requests only for the last couple weeks and thought I would treat myself. Wrong Bed, Right Guy is an amazing short story. I loved it from the first chapter where Elle is climbing up the stairs trying to talk herself in and out of seducing her boss and Gabe’s sexy voice about his “dream” hehe. Elle is definitely one of those easily relatable characters at least to me because she always plays it safe, afraid to take a risk because of the past. Gabe is the exact opposite, he’s strong and while his past hadn’t been pleasant he pushes through it. I loved both characters a whole lot, I thought the character growth really made the characters even more likeable by the end on the novel.

While the story was a tad predictable in the fact they there was the unoriginal unavoidable fight and the way the characters realize they’ve done wrong yatta yatta that was really my only problem…Well and it was so short I was like “WHY IS THERE NOT MORE!?!?!” but I guess it’s that way with any good story.

Overall I recommend Wrong Bed, Right Guy to any reader looking for an amazing short read with great writing and even better characters and story telling. I read this story in a couple hours and it was an amazing few hours with a great can’t put down story. Katee Robert really did an amazing job and I WILL most definitely be reading the next stories in the Come Undone Series!

Quote from Story:
"That's a problem for you, I take it. Christ, babe, don't you ever let your hair down? If you did, it'd probably help with that stick up your ass."

About the Author:
New York Times and USA Today bestselling author, Katee Robert, learned to tell stories at her grandpa’s knee. Her favorites then were the rather epic adventures of The Three Bears, but at age twelve she discovered romance novels and never looked back.

Though she dabbled in writing, life got in the way—as it often does—and she spent a few years traveling, living in both Philadelphia and Germany. In between traveling and raising her two wee ones, she had the crazy idea that she’d like to write a book and try to get published.

Her first novel was an epic fantasy that, God willing, will never see the light of day. From there, she dabbled in YA and horror, before finally finding speculative romance. Because, really, who wouldn’t want to write entire books about the smoking-hot relationships between two people?

She now spends her time—when not lost in Far Reach worlds—playing imaginary games with her wee ones, writing, ogling men, and planning for the inevitable zombie apocalypse.