Review: A Shade of Blood 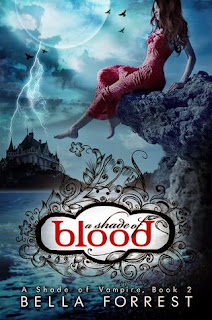 
Book Description:
When Sofia Claremont was kidnapped to a sunless island, uncharted by any map and ruled by the most powerful vampire coven on the planet, she believed she’d forever be a captive of its dark ruler, Derek Novak.

Now, after months of surviving an endless night, the morning sun may soon rise again for Sofia. Something has possessed Derek’s heart and he offers her a gift no human slave has ever been given in the history of his cursed island: escape.

High school, prom and a chance to move on with her life now await her.

But will she be able to forget the horrors that steal her sleep away at night? … and the feelings that haunt her for that tormented prince of darkness?


Wow wow what an insanely compelling story Bella has written of blood, love, and vampire politics. A Shade of Blood definitely kept me craving more way after the final pages. A Shade of Vampire is one of the most addicting and breathtaking series I’ve ever read.

Sofia Claremount was having a great life with her friends and Derek Novak, but then she was attacked and now has to escape the island of vampires known as The Shade with her best friend Ben or her life will forever be in danger. Trying to live a normal life though is harder to do when nightmares plague her every night to remind her of The Shade and all she left behind. Even when her best friend Ben tries to take up a romance with Sofia she holds herself back from Ben as her heart still belongs to a certain vampire she left behind on the island. Going to high school and prom is supposed to be easy but it’s becoming harder and harder to look away from everything she left behind and what happened there, especially when Ben is set on becoming a hunter to try and take back everything that was taken away from him and a certain vampire shows up to convince her to go back.
Meanwhile, Derek Novak is slowly losing the battle against the darkness of his curse and his mind. He suffers from black outs and everything in his life reminds him of the woman he lost, Sofia. On the hunt for his brother and single handedly trying to save The Shade and keeping everyone safe from discovery of the Hunters and against the overtaking from other vampire clans Derek is quickly losing the battle of his sanity.
When Sofia shows back up at the Shade Sofia needs to make sure she makes something out of her return to try and save the humans on the island and make sure Derek doesn’t lose his mind again. With almost every vampire against them, and their feelings for each other grow more and more for each other things don’t seem like they could become any more complicated, and that’s when Derek’s father shows up.

I swear I didn’t think Bella Forrest could do a better job after A Shade of Vampire. Boy oh boy was I ever wrong. A Shade of Blood did an amazing job of blowing me out of the water. I have such a thing for vampires and Bella did not disappoint with the Shade of Vampire Series. I fell in love all over again with this series and could not have loved this series more. I was aa tad concerned with the whole multiple POV even though I’m a fan but the complexity of this story wouldn’t have been the same without all the different pov’s coming in. Emotions were definitely running high with this story and I couldn’t help but feel for every character.

All in all I loved A Shade of Blood and cannot wait to dive into the rest of this series. I highly recommend this series to vampire fans.

Quote:
"I, Prince of the Shade, was begging her-supposedly my slave-not to leave me, because I knew without a doubt in my mind that her departure would only serve to plunge me deeper into the darkness that took over my life five hundred years ago when my own father turned me into the monster I was.

About to Author:
*I love getting friend requests here on Goodreads, so feel free to send one!*
I guess my life as a writer started when I was five; I'd sit under the kitchen table with my box of multi-colored wax crayons (I miss those) and create picture books. Creative writing was always my favorite subject and I used any free time I had to sit down with a notepad. Not much has changed, except that now I have developed vampirish habits: my writing "day" typically starts at 1am.