Review: Chase Tinker and the House of Secrets 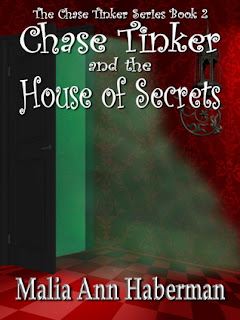 
Book Description:
In Chase Tinker's world, magic, lies and secrets can be a lethal combination...

After spending the summer at his grandfather's gigantic, incredibly magical house, thirteen-year-old Chase Tinker thought things couldn't get any more bizarre, or that the secrets and lies couldn't get any worse, but he was wrong.

As summer turns into Autumn, join Chase and his family for even more magical craziness. Craziness that will include: the sneezing of strange powers, the reappearance of the evil Marlowe family, another frightening kidnapping, the discovery of a mysterious, magical girl, a dangerous rescue mission, and a secret so mind-boggling, it will lead to a shocking climatic finish that will turn Chase's world completely upside down and leave him feeling like one of the worst people on the planet.

My Review:
I received a copy of Chase Tinker and the House of Secrets for an honest review.

After the battle against the dark magic users Marlows the Tinkers need time to recover from everything that’s happened. Grandfather Tinker’s health is anything but perfect and Janie is devastated over the loss of her mother. With Chase and his father still not talking, and his mother moving in to watch over everyone nothing is perfect at the moment. When Chase’s father proposes a funeral for Janie’s mother everything goes up in flames as the Marlows show up inside the Chase Tinker fortress with the help of James, Janie’s brother and they take Janie with them as they escape. Now the Tinker’s must come together to try and strengthen their powers and get Janie back. What none of the Tinkers counted on was finding another girl who uses magic, Nori. Discovering her means one more person to help the cause of saving Janie. Too bad when the plan is hatched on Halloween the day all magic users powers are strongest all the secrets that had been kept come out in the open, many are hurt and all the Tinkers lives will be changed forever.

Chase Tinker and his family are magic users which is really cool. I enjoyed how the house wasn’t the main focus in the book anymore. The characters have grown up and I feel they were more relatable in this book than in the first one. The magical powers and battle scenes were way cooler in this second book as well. Chase Tinker and the House of Secrets was definitely more exciting and had a lot more exciting twists than the first book.

Overall, Chase Tinker and the House of Secrets was a great sequel to an already good series. The ending will definitely leave you wanting more and wondering who lived, who died, and who in the end will prevail.

Author of "The Chase Tinker Series" Malia loves dancing, reading, writing, sunsets, ladybugs, playing video games on her iPod, watching TV, and chocolate. She also has terrible motion sickness and hates onions. She's always wanted to have the ability to teleport and the power to move things with her mind. She lives in the Seattle area with her four wild and crazy ferrets.
To Contact or Follow:
Website/ Goodreads
Posted by Reese's Reviews at 1:00 AM