Review: A Castle of Sand 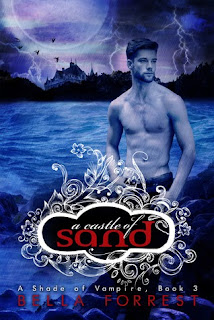 "Bella Forrest never ceases to amaze me! ... A Castle of Sand is the best yet, in my opinion... Once I started to read this story I couldn't help but be captivated, the world Bella Forrest has brought to us is EPIC."
- Lady Amber's Reviews

What Sofia has with Derek feels like a sandcastle; temporary and something that the waves of life and time will soon ruin...

Since the return of Gregor Novak, the island has turned several shades darker. His hatred toward Sofia and thirst for fresh blood lead to a brutal war igniting between father and son.

Meanwhile, the hunters are gaining formidable strength and resources by the day; they know that the safety of The Shade hangs entirely on its ability to remain hidden from them.

And a sinister secret lies in wait for Sofia within the bowls of an Egyptian desert ... a secret that threatens to crush her sandcastle much sooner than she could have expected.


My Review:
Oh my goodness A Castle of Sand was amazing!! Holy toast just when I thought this series couldn’t blow my mind more A Castle of Sand is released and makes the Shade of Vampire series so much better.

"Sandcastles always fall." Sofia and Derek’s relationship is quickly becoming more intense. When Derek decides to take their relationship to the next level by wooing her Sofia becomes more and more hesitant about opening up her feelings to him. The Shade definitely having more problems now with Derek’s father home he plans on making Sofia’s life a living hell. When faced with the situation to move to the Catacombs with the Naturals or become a vampire Sofia chooses to move out of Derek’s home and into the Catacombs leaving less and less time for each other. Now Sofia is learning that there are more problems in the Catacombs and no humans are safe. Together Sofia and a group of Naturals try and stop the vampires’ from taking more of their blood and using them as toys. With added pressure on politics, and a surprise guest apperence of Ben the island is in more chaos than normal. Deaths are rising and blood is running out, and so is time to find a solution. Just when things seem to be going right Sofia is taken away by the evil Boris to become his bride for he was promised to him by someone very close to Sofia so long ago. When Hunter’s and Derek show up to the rescue there is no telling who will survive the battle.

A Castle of Sand was an amazing novel. I know people say there’s the curse of the third book but A Castle of Sand definitely had no problems keeping my attention throughout the entire book. Both Derek and Sofia’s feelings for each other grow more and more intense throughout this novel more so than ever before. I think all the characters grew more as characters and that just had me loving them all the more than ever before. I couldn’t believe the ending which definitely had me wanting so much more and I really wished I had waited to read this until the fourth book was released. Alas now I have to suffer with waiting for the book to be released in a couple months *sigh* it’s going to be torture.

In many ways A Castle of Sand was even more amazing and complex in its’ writing and characters than in the first book. Bella did an amazing job as usual with writing this series. I love that there are alternating pov’s and so many surprises around every corner. There has not been one book in this series that hasn’t thrown me for a loop. I cannot wait for the fourth book to this series and I know I will be rereading this series time and time again for one of the most compelling series of this time. I seriously recommend this series to everyone because I feel it’s one of those series almost everyone will like.