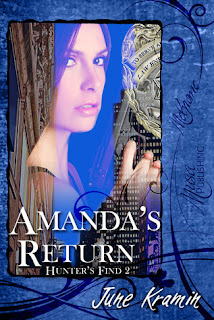 
Book Description:
Returning to help the mob was not what Mandy had in mind when she joined witness protection with Hunt.

After a move and name change, Amanda thought her days with dealing with the FBI and Mob were over. Her past comes back to haunt her as Eddie, the right hand man of the kingpin himself tracks her down, claiming to need her help. Amanda’s instinct is to refuse, until she discover what it is he needs. The return of the kingpin’s son, Angelo.

Vince Menusco’s men are being killed off with no explanation of who is behind it. Learning of Angelo’s disappearance is enough for Amanda to agree return to the streets of New York and help find him. Against her wishes, Hunt goes along to help.

Even after getting Angelo to safety, Eddie refuses to free Amanda from their deal. Threatening her family, he insists she puts an end to the killings. Finding out who is causing them and why was more than Mandy was prepared to deal with.

My Review:
I received the novel Amanda’s Return for an honest review.

When Amanda and her husband Hunt went into protective services with their daughter and Hunt’s parents after the events with Mob and the betrayal from her close friend inside the FBI the happy couple was more than ready to settle down for a happy life in Florida raising their daughter. When Eddie and his crew come barging into their house threatening her family Amanda has no choice but to go with and try to solve the case of her close friend Angelo who has gone missing. When immediately after returning to New York with Hunt and Mob in tow Amanda finds Angelo and is more than ready to go home to her daughter. Too bad that wasn’t all Eddie wanted from her Amanda and Hunt are forced to figure out who’s behind the all the killings surrounding the Mob. When Amanda goes back undercover to track what’s been going on Hunt and Amanda begin to slowly piece together what’s been going one. Who’s behind all the killings is a giant shock to everyone involved and with Amanda having a baby on the way her and Hunt need to decide after they make it out of everything alive if Amanda can finally walk away from the Mob and the FBI.

Amanda’s Return was a giant shock for me. I enjoyed Hunter’s Find and didn’t think the lives of Amanda and Hunt could become any more complex. I was so wrong. Amanda and Hunt while trying to have a baby are also out on the streets of New York kicking butts and doing some amazing detective work. An Ex-Mob wife, Ex-FBI agent and her police officer husband make quite the couple while managing to love each other despite each-others flaws throughout the story and everything that happened made their relationship stronger than ever. I have to say I was a little skeptical to see how June Kramin would wrap up this amazingly complex sequel but I needn’t worry because the ending couldn’t have been more perfect.

While the story seemed to take a little while to read nothing in the story was unnecessary and the characters were amazing and while not really relatable still remained likeable for their strength and love for one another. Amanda’s Return was complex and the writing was while at times a bit wordy with description enjoyable.

All in all, I really enjoyed Amanda’s Return while not as much as Hunter’s Find the characters and writing made the overall story extremely enjoyable and a quick enough read. I would really suggest the Hunter’s Find books to readers who enjoy crime solving, great action, and lots of mystery in their novels.

About the Author:
Wife, Mother, Writer, Lunatic. Not necessarily in that order.

"There is a fine line between genius and crazy... I like to use that line as a jump rope!"

June, who prefers to go by Bug, was born in Philadelphia but moved to Maui, Hawaii when she was four. She met her “Prince Charming” on Kauai and is currently living “Happily Ever After” on a hobby farm in a small town in Southern Minnesota.

She enjoys riding her Paint horse, Ringo, around the small ghost town they are playfully reestablishing with the neighbors and playing in Photoshop. Her son and daughter are her greatest accomplishments. She takes pride in embarrassing them every chance she gets.

Being hopelessly addicted to 80's music is her super power.