Review: A Shade of Vampire 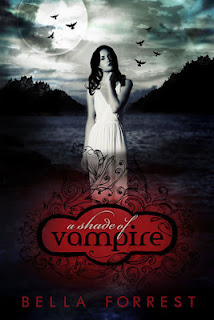 Book Info:
Title: A Shade of Vampire
Series: A Shade of Vampire #1
Edition: E-book
Pages: 152
Published December 14th 2012
To buy:
Book Description: (goodreads)
On the evening of Sofia Claremont's seventeenth birthday, she is sucked into a nightmare from which she cannot wake.

A quiet evening walk along a beach brings her face to face with a dangerous pale creature that craves much more than her blood.

She is kidnapped to an island where the sun is eternally forbidden to shine.
An island uncharted by any map and ruled by the most powerful vampire coven on the planet. She wakes here as a slave, a captive in chains.
Sofia's life takes a thrilling and terrifying turn when she is the one selected out of hundreds of girls to join the harem of Derek Novak, the dark royal Prince.

Despite his addiction to power and obsessive thirst for her blood, Sofia soon realizes that the safest place on the island is within his quarters, and she must do all within her power to win him over if she is to survive even one more night.

Will she succeed? ...or is she destined to the same fate that all other girls have met at the hands of the Novaks?
Genre:

Plot:
Sofia Claremont devastated by her best friend forgetting her birthday again. Walking down the beach alone at night isn’t safe but she does it anyway. When an arrogant guy shows up on the beach she knows this spells danger. Before Sofia has a chance to run the man knocks her out.

Waking up chained to a wall in a dark room wasn’t the idea Sofia had for her birthday. Neither is having the guy who brought her here attempting to rape and take blood from her because surprise he’s a vampire and Sofia is now in a vampire colony to be part of the harem for the dark prince Derek Novak.

When Derek Novak wakes up he’s more than a little surprised. His original wish was to be asleep for the rest of eternity having thought he fulfilled his destiny long ago. When the descendent of the witch that put him to sleep tells him that his destiny has not yet been fulfilled all he wants is to go back to sleep, but he knows he can’t ignore his duties or his destiny.
With Derek awake his siblings bring in his new harem to feed off of. Sofia seeing Derek for the first time she’s taken back by how young he looks. When his eyes and hunger focus on her she tries everything she can to not get bitten, and it works. Now Sofia is living in Derek’s quarters and while she’s supposed to be safe someone in the family is trying to do everything he can to make Sofia his and Sofia’s heart might not be so safe either.

Characters:
Sofia: I love Sofia! She’s the perfect female protagonist. She’s strong, funny, caring, and is always able to make light of the situation she’s in. Sofia definitely grows as a character throughout A Shade of Vampire and that growth makes her even more likeable. Overall Bella wrote a great character with Sofia and readers will definitely be able to relate to her.

Derek: Holy hotness Derek is one sexy vampire. Totally perfect book boyfriend material. While he’s a total bad ars that can kill someone with a fist (woah awesome!). He’s also caring for he cares a lot about his family, Sofia, and humans as a whole. He hates abuse of power and even though he’s a prince he’s not a total a-s-s.

Overall:
Bella Forrest did an amazing job with this story. I loved every minute of this story and while I was skeptical in the beginning Bella really played at my weaknesses: vampires, strong female characters, dual pov’s, romance, and great writing. A Shade of Vampire captured my attention from the beginning and I could not put it down. The ending will definitely have readings wanting more and I know I will be reading everything that Bella puts out because her writing and stories rock.

Recommend:
I would recommend this book to readers who love hottie guys, strong female characters, and vampire love stories!