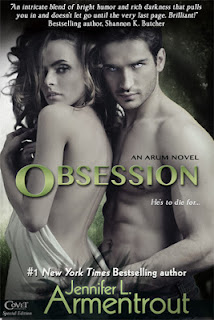 
Book Description:
He’s arrogant, domineering, and... To. Die. For.

Hunter is a ruthless killer. And the Department of Defense has him firmly in their grasp, which usually doesn’t chafe too badly because he gets to kill bad guys. Most of the time he enjoys his job. That is, until he’s saddled with something he’s never had to do before: protect a human from his mortal enemy.

Serena Cross didn’t believe her best friend when she claimed to have seen the son of a powerful senator turn into something... unnatural. Who would? But then she witnesses her friend’s murder at the hands of what can only be an alien, thrusting her into a world that will kill to protect their secret.

Hunter stirs Serena’s temper and her lust despite their differences. Soon he’s doing the unthinkable—breaking the rules he’s lived by, going against the government to keep Serena safe. But are the aliens and the government the biggest threats to Serena’s life… or is it Hunter?

Well holy crap I never thought when I started reading the Lux series I would fall in love with the enemy of the famous Daemon Black. Yet almost as soon as Jen started putting out teasers I knew I’d fallen in love with an Arum.

Hunter hates the Luxen almost as much as he hates his job working as the governments lackey. When he gets orders that he needs to pick up Serena and take her home with him for information he’s non to thrilled about her staying with him. After the Luxen attempt to kill her he knocks her out and takes her home.

Waking up in a strange place with an alien and no pants wasn’t what Serena had in mind. Neither is taking orders like a dog from Hunter no matter how mouthwatering he looks without a shirt on. When escape doesn’t work Serena knows there’s not too much she can do now that the government, the Luxen, and the Arum are after her there’s not much she can do.

Despite their situation and their species differences Serena and Hunter are extremely attracted to each other. Fighting their attraction and sexual desires for each other day in and day out is tiring. When they finally give in to each other their emotions run high and Hunter needs to decide if his job is more important than his job.

Characters:
Serena is one feisty sexy mama. I love her just like all the other of Jen’s female characters. She’s strong, amazingly sharp witted, and has got huge lady balls for standing up against a government agency and a whole bundle of aliens!

Hunter is one yummy yummy alien. As hot as Daemon? Abso freaking lutely. He’s got an attitude and alien powers and he’s not afraid to use them. Hunter knows he’s sexy and a bad ars who can and will take on anything and anyone that will come at them. He’s arrogant and gives orders to whomever. He doesn’t take orders and has an extremely bad attitude. However, he’s still a loveable character and has a lot of growth over the course of the book.

POV:
Both Serena and Hunter get their point of views out.

Overall:
Holy blueberry muffins I am obsessed with Obsessed. While I don’t love Hunter as much as Daemon Hunter is still one sexy alpha male. Serena is one amazingly strong female character as survives everything that’s thrown at her in other words I love the characters, the storyline, the world..well I loved it all. Obsessed was definitely one of those stories I wasn’t able to put down and instantly fell in love with. Obsession is an enticing action packed story that will definitely leave readers craving more.

About the Author:# 1 NEW YORK TIMES and USA TODAY Bestselling author Jennifer lives in Martinsburg, West Virginia. All the rumors you’ve heard about her state aren’t true. When she’s not hard at work writing. she spends her time reading, working out, watching really bad zombie movies, pretending to write, and hanging out with her husband and her Jack Russel Loki. Her dreams of becoming an author started in algebra class, where she spent most of her time writing short stories….which explains her dismal grades in math. Jennifer writes young adult paranormal, science fiction, fantasy, and contemporary romance. She is published with Spencer Hill Press, Entangled Teen and Brazen, Disney/Hyperion and Harlequin Teen.
She also writes adult and New Adult romance under the name J. Lynn. She is published by Entangled Brazen and HarperCollins.