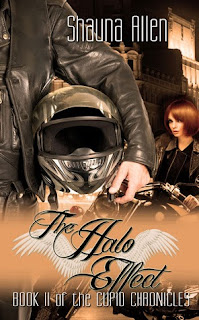 Love Detail’s favorite angel has his sights set on his next target: the stoic and mysterious Noble Blackfeather. And it just may prove to be his toughest case yet. Noble’s reclusive ways keep his angel at wing’s distance, and love even further. But he’s not playing a part – he’s truly masking a painful secret and a profoundly wounded heart.

Noble’s been paired with Braelyn Campbell, the cute single mother next door. She’s adorable, friendly, fun…everything Noble needs. This should be a Love Squad slam dunk. Except she’s making a fresh start in Texas to protect her son from a volatile ex, and she’s not about to risk her heart or her son on another man. Even if he’s sexy as sin and always coming to her rescue.

But, reluctantly, they are drawn together – thanks to their cupid’s dogged efforts and a whole lotta chemistry. Can the girl next door learn to trust again and help heal Noble’s wounded heart? Together, can they save the lost, hurting boy she's raising? Can the angels help it happen before it's too late?


I received a copy of The Halo Effect for an honest review.

Holy crap on toast to say that Shauna Allen has done it again would be a complete understatement.

Michael the Angel of love has another mission, to bring his close friend Nobel Blackfeather and Nobel’s next door neighbor Braelyn Campbell together. Braelyn moved to Texas to get away from her ex-boyfriend who threatened her son. In Texas she hoped to make a new life for herself and her son. Now she’s getting calls from school about her son Tisten getting into fights and not doing homework. Not sure what to do anymore she signs Tristen up for the Big Buddy program and who does he get paired up with? None other than our wonderful angel Michael, Michael does whatever it takes to become close friends with Tristen and get Nobel into his neighbors life by breaking things so Nobel will have to come over and fix it. As time goes on and emotions become more and more involved the three some need to decide if they can let go of the past and move on and become the family they all so desperately need. Even when everyone becomes discouraged Michael knows God always has a plan.

The Halo Effect is one of those stories where the back stories of each character become intertwined very delicately intertwined with each character it’s amazing. I loved all the charactres, they all had such amazing growth and humor throughout the story it was hard not to like that characters. I think honestly that’s what makes Shauna Allen’s books is that each character has such a great back story with lots of struggles but in the end prevails and grows. I mean isn’t that what we as readers and people like to think for ourselves? That we will one day overcome everything weighing us down and prevail? I know I do.

The only major problem I had with the story is..well there was SOOOOO much sexual tension throughout the book that when they did come together there was no going into the scene it was just “cut to” their future. Made me sad because believe me Shauna works you up to where you’re like “I’m ready to see some action and then- nothing. Oh well that was only real complaint about The Halo Effect


This describes the "Cut to" of how I was feeling.

Overall, I really enjoyed The Halo Effect almost as much as Inked by an Angel. Shauna Allen is one of my favorite authors and The Halo Effect was definitely not a letdown as far as sequels go.  I think a lot of people can get into The Cupid Chronicles, lots of swoony moments, sexy men with tattoos, and while there is the God aspect it’s not overbearing if that kind of thing bothers you. I really hope readers can check this series out because it’s awesome!! The Halo Effect is a story with deep and emotional characters that readers will identify with and a unique story line that will definitely leave them wanting more.

Favorite Quote:
His hands wrapped around and gripped her hips, sliding leisurely down to cup her bottom like he’d done it a hundred times, his hands a perfect fit.

“Gorgeous,” he murmured against her lips. “First thing I noticed about you.”

“Mmm hmm.” He nibbled her lower lip. “It’s perfect. Just like the rest of you.”

He laughed against her throat. “Oh, no, it’s definitely you who’s perfect, baby.” He eased back long enough to pin her with his deep gaze. “Why do you think I call you Sweet Cheeks, anyway?”

About the Author:
Shauna grew up an only child with two open and loving parents in Central Texas. She’s married to her high school sweetheart and is the mother to three fantastic (no, that’s not a typo!) teenagers.

When she’s not writing, editing, or acting as a personal assistant to a NYT Bestselling author, Shauna enjoys reading, movies with Gerard Butler, vacays to the beach, and hangin’ with the kiddos–even if they don’t like hangin’ with her!