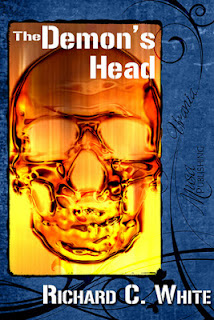 Book Description: (goodreads)
The things I do for money…

Faced with the choice of going hungry or getting a real job, I had to wonder which was worse. Then, my luck changed when I heard about this old abandoned temple. Seemed like a simple job. Get in, grab some treasure, and get out of this one-horse town and back to enjoying life.

Of course, there was the small matter of the temple being in the middle of the swamp, the ferocious creatures living there, and my

arch-rival trying to get to the treasure first. Oh, and did I mention the temple was cursed?
Looks like my luck’s running about normal here. But rivals and curses can be overcome . . . if you don’t mind getting your blades a little dirty.
My Review:
I received a copy of this book for an honest review.

The Demon's Head is a short story about a man who has used his wits to escape dangers time and time again.
When the main character finds himself over hearing two men talk about a temple in the swamps and his small amount of money he knows he needs to find this temple and make off with the treasures so they will last him a long time.
The journey through the swamps isn't an easy one and when he comes out the men are already a head of him. Thinking it wise to follow behind and take the jewels that the other men leave behind he follows. However, when he and the other men get inside they see something they never would have imagined and it's deadly.
Wow while the book was short it was amazingly well written. The character didn't have a name but whilee reading it felt like I was the character. Strange huh? Super awesome writing and story. 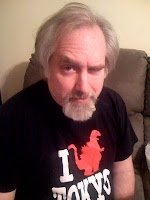 About the Author:
Richard C. White is the author of the "For a Few Gold Pieces More" collection of dark fantasy short stories being released by Musa Publishing.

Along with writing Fantasy and Science Fiction, Rich has been bitten by the "New Pulp" bug and has several stories coming out by Pro Se Productions in the near future. The first of his, "Notes in the Fog" has been released in the "Charles Boeckman Presents: Johnny Nickle" duology in May 2013.

He also is a media tie-in writer, having written for Star Trek, Doctor Who, and The Incredible Hulk. His novel, "Gauntlet Dark Legacy", was the best-selling tie-in for his publisher in 2004.

Richard is also active in writing organizations, being a member of the Science Fiction and Fantasy Writers of America and the International Association of Media Tie-in Writers. Additionally, Richard serves on the Writer Beware committee for SFWA.

A former soldier, who was stationed with the Third Armored Cavalry Regiment and the 101st Airborne Division (Air Assault), Richard also works as a Technical Writer/Analyst for a defense contractor when not working on his latest story.
To Contact or Follow:
Goodreads/ Twitter
Posted by Reese's Reviews at 1:00 AM