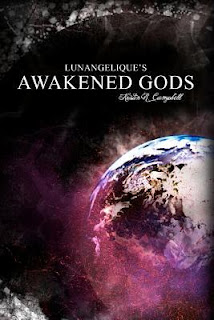 Lexi has fulfilled her destiny and now the gods have awakened, but is that a good thing?

Now, Lexi lives in a world that is on a global collapse. The gods are angry that they have been forsaken and are seeking revenge on humanity. The oceans are in turmoil, tornadoes, earthquakes, hurricanes, volcano eruptions and famine are causing global chaos, and the sun is being held hostage in an astrological phenomenal, never-ending solar eclipse by the avenging Helios.

Then, there is the problem of Zeus’ threat. Lexi must choose between giving herself to him or watching the “abominable” angels die by his hand. Not to mention, Hera, Zeus’ wife, is proposing her own jealous-driven proposition to Lexi: stay away from her husband or the angels and everyone dear to her will die. Lexi sees no way out of either predicaments and it puts a strain on her relationship with Cole. Will she lose him either way?

Okay so this review is going to a bit off of its’ usual layout so try not to be alarmed.

Holy bleep, first of all that ending was a complete mind bleep. I am in such a state of confused bleeped up state I don’t know what’s what. Needless to say readers’ minds will be blown when they read the ending and when they just think about the ending.

Anyway on to the rest of the book:
Lexi has finally completely her destiny and released the Gods from their slumber, only problem? A war is starting between the Gods and humanity. The whole world is in disarray, the Sun is gone hidden behind the moon in a constant eclipse. The oceans are unsafe, crops are dying and Zeus is wreaking havoc on villages for forsaking him.

To top it all off Lexi is having more problems of her own like the fact that now Zeus is after her and that means so is Hera. Battling off Gods wasn’t exactly what Lexi had in mind when she released them from their slumber but now she needs to figure out a way to keep Zeus away, permanently.

While Cole is often missing from Lexi’s life on missions to find Helios but when he as with Lexi they savor every moment together, even though Lexi’s lack of sleep and her keeping secrets about Zeus and his threats are having a strain on their relationship.

Wen Cole figures out what’s going on they both use every resource and contact they have to try and save Lexi from Zeus. When help arrives it arrives a bit too late for Cole for Zeus finds him and hides him in a place no one would look, partially because everyone thinks he’s dead.

After Lexi goes missing everyone goes ballistic and looking into the future they know something goes terribly wrong because Lexi is gone from it.

Like I said this book was a complete mind bleep. While some parts I was like “come the bleep on and tell me what happens!!”  I truly loved this story. Lexi was still the strong amazing character she’s always been but in this story she definitely had more of a vulnerability to her that was a nice change up. Cole was still drop dead sexy and Awakened Gods definitely does his justice on exactly why and how he’s such an amazing character. Patryck is in this book a whole lot and while sometimes he was a complete ars face he wasn’t all bad. The POV switches off from Lexi’s POV, to Coles, to Patrycks which I loved because you know how I love differing perspectives in books.

Overall, Kristin definitely did an amazing job with the conclusion of the Lunangelique series. It was definitely nothing like I expected and will leave readers wondering what is real. I fell in love with this series from the first book and I can safely say Awakened Gods was the perfect conclusion.

Oh oh and I totally loved how this book referenced one of my favorite books Pushing the Limits and the story about Echo’s name.

About the Author:
Currently lives in Utah with husband and two children. Works as an editor, is prior military and has a bachelor in Criminal Justice. Loves hiking, travelling, and, of course, reading and writing.
To Contact of Follow:
Website/Blog/ Facebook/ Twitter/ Goodreads