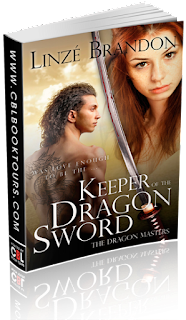 Summary:
It was definitely not her week. Her uncle had been murdered, her life had been threatened, an old school friend had re-appeared, she had two body guards and a new home. Elizabeth L'Emery was not having a good time as the new owner and chief executive of the largest fabric manufacturer on Xa'an.

Randall Storm had missed his best friend from school, but he had so many secrets that staying away from her had seemed to be the only solution to keep her safe from the uncontrollable lust for blood of his dragon half. But when he was assigned to her protection detail, he didn’t want to be anywhere else.
As they search for ways to control his magic that didn't enslave him - and didn't kill her - more threats came to try and pull them apart. When the opportunity arises to put a weapon of incredible power into her hands, Elizabeth has to decide if the violence of the blood ritual would be worth the sacrifice of becoming the Keeper of the Dragon Sword. 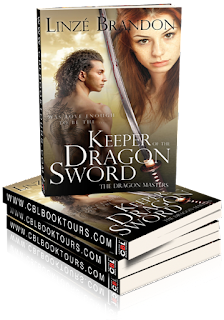 My Review:
I received a copy of Keeper of the Dragon Sword for an honest review.

Elizabeth's life is turned upside down when Randall Storm her old school friend walks back into her life to tell her that her life is being threatened as she must go into hiding after her Uncle's death. Finding that her new mate is the one who wants her dead and realizing she is the new boss of her family company is a bit much to learn in one day. Now she must go with her family of magicians to keep safe from a very powerful and very old threat. The threat on her life isn't Elizabeth's only problem though because she now knows who her real fated mate is, Randall a born blood dragon. When their emotions collide Elizabeth goes through major emotional and physical trials to be with Randall. Trial after trial strengthened their love for one another but in the end it may not be enough.

Keeper of the Dragon Sword was an interesting tale of two strong people who have supernatural powers that have to fight with everything they have to stay together. The character growth and strength in each character was admirable and I deeply enjoyed the overall story line. There was tons of action and magic which was really cool and made the story interesting.

Some major problems I had with Keeper of the Dragon sword I think was its’ overall execution. Many times Randall even though he has been friends and in love with Elizabeth for years and years often referred to her as “the woman” which made me think that the author couldn’t decide on a name for her until later and forgot to add it in. The book was overly weighed down with description with things like 50,000 tea breaks and bathroom things and hair dryings and walks and eating and blah blah blah. I think I expected so much more from the description of Keeper of the Dragon sword since I thought the story unique but the execution and writing style just wasn’t there for me as a whole

Overall, the book was an average read. I thought the idea was amazing and definitely unique in its’ own right. The characters were great but the execution in how the story was told was just not there for me. I think many adult and paranormal readers will enjoy Keeper of the Dragon Sword but it just wasn’t for me. 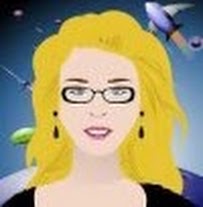 Author:
Linzé Brandon is the pen name of a South African engineer and project manager who taught herself to read before she went to school. She started writing in a time period of her life when she was self-employed as an export consultant, and had much better time management skills. Focusing on writing what she loves to read, fantasy and paranormal romance, she does dabble in SF, erotica and erotic romance when writing short stories. It is her dream to write novels full time, but until then she divides her time between work, writing, marketing her books, cross-stitch, archery and painting mixed media abstracts.


Butterfly on a Broomstick


Smashwords
Posted by Reese's Reviews at 1:00 AM