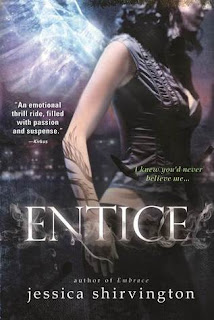 Violet Eden is Grigori - part angel, part human. Her destiny is to protect humans from the vengence of exiled angels.
Knowing who to trust is key but, when Grigori reinforcements arrive, it becomes clear everyone is hiding something. Even Lincoln. The only thing Violet does know: Phoenix's hold over her is more dangerous than ever.
The race to find the one thing that could tilt the balance of power brings them all to the sacred mountains of Jordan, where Violet's power will be pushed to the extreme. And the ultimate betrayal exposed.

Initial Reaction:
I was really excited about reading Entice and learning more about Violet and her world. I was hoping for a lot of action and some more hot scenes between Violet and Lincoln.

Plot:
Violet Eden’s life is nothing like she thought it would be.

Becoming a Grigori was never part of the plan. Learning to fight Exiles and returning them is what her life is about now. Even while Lincoln grows more and more distant it’s up to Violet to kill the Exiles with or without her partner.

When the new reinforcements come they bring with them a bunch of surprises. One of the main rules of being a Grigori is no romance between partners because it weakens them. When Violet meets her new trainers Nyla and Rudyard two partners who are also soul mates everything changes. Now Violet is more sure than ever that Linc and her are destined to be together, that they too are soul mates.

Another surprise is that the other Grigori turn out to be great friends. Spence is just as crazy and adventurous as Violet which tends to land them both in a bunch of trouble. When a night out with her new friends leads to violet discovering just how much of a hold Phoenix still has over Violet, and the hold is a deadly one.

Now more than ever they need to find the list of names of the Grigori before Phoenix and that means traveling to the mountains of Jordan where loss and destruction follow. Returning home Violet has lost all hope and when the traitor is revealed it brings a shock to everyone.

Romance:
The beginning of this book there was little to none. Later though the romance level turned way way up! Loved it lots. Lincoln definitely showed a different side of himself and that made this book better even all the more tragic

Overall:
I enjoyed Entice a lot. The characters were a lot more in their depth I think. Lincoln is still brooding and sexy. Violet is back to normal and extremely kick-butt in this novel. Phoenix isn’t in this book as much which made me very happy. No offense to you Phoenix fans out there. Entice definitely left me wanting more and I was so happy I had the third book Emblaze at the ready!

About the Author:
Jessica Shirvington is the author of THE VIOLET EDEN CHAPTERS also known as THE EMBRACE SERIES. An entrepreneur, author, and mother living in Sydney, Australia, Jessica is also a 2011 finalist for Cosmopolitan’s annual Fun, Fearless Female Award. She’s also one of the lucky few who met the love of her life at age seventeen: Matt Shirvington, a former Olympian and current sports broadcaster for FOXTEL and Sky News. Married for almost eleven years with two beautiful daughters, Sienna and Winter, Jessica knows her early age romance and its longevity has definitely contributed to how she tackles relationships in her YA novels. Previously, she founded a coffee distribution company, Stella Imports, in London, and before that was involved in the management of restaurants Fuel Bistro and MG Garage in Sydney. Jessica is now a full-time novelist and living her dream.