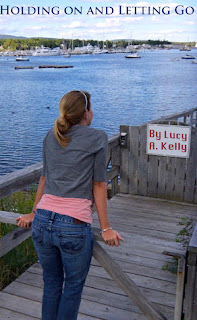 
Title: Holding On and Letting Go

Book Description:
Is there a way to describe the ties that bind us together? What happens when one of those ties is unexpectedly severed? Can everything else remain the same? Will the other ties hold strong?
Two years after her little brother's death, sixteen year old Emerson Caulfield returns to a home that she spent the last two years missing. In theory, everything should be the same. Her best friend, Matt, still lives next door. Her house is in the exact same condition as they left it. The scenery and hallways haven't changed, yet for Emerson, everything is completely different. The place may be the same, but Emerson is most certainly not. She returns home hurt, angry, and miles away from the girl she once was.

The 60,000 word novel alternates between the perspectives of Emerson, who is struggling to keep breathing on a daily basis, and Matt, who wants to have his old best friend back so badly that he is willing to overlook the fact that she has completely changed. Though their friendship and relationship is a major part of the story, it takes backseat to the unique bonds between siblings, what happens when your worst enemy is in fact yourself, and the hardships that come with growing up and changing.
My Review:
Plot:
Emerson Caulfield has returned home after her parents shipped her off to France when her younger brother died two years ago. Now home and living with her brother she goes through the motions to try and make it through the days without Peter. Visiting his grave every day and constantly dreading waking up in the morning though definitely doesn’t help on her first day back to high school.
Matt and Emerson used to be best friends until she ceased all contact with him after leaving. He didn’t expect her to come home but now that she is he’s going to do everything he can to make sure he’s there for her even if that means breaking up with his girlfriend to be with her. When the break up turns out to cause drama for Emerson Matt and his best friend Luke come up with a plan to fix it, Emerson and Matt start pretend dating.
While at first everything is okay Matt begins to realize that all his life he’s been in love with the girl he is now fake dating. Everything in his life seems to be coming together except Emerson doesn’t seem to be interested. When truths about Emerson come out in the open Matt realizes he may not even know the girl he fell in love with.
Now that the truths are out Emerson realizes she needs to get professional help and so she begins to piece her life back together. Everything couldn’t be more perfect until on the way to prom a disaster shatters everything and everyone. Matt and Emerson now need to decide if they can get over each-others changes and the tragedies that have hit them both enough to come together.
Characters:
Emerson: Emerson changes a lot throughout the story and the character growth makes her a likeable character. If she didn’t grow or change throughout the story then I don’t think I would have liked her as much but she did and she was a true inspiration.
Matt: While I really liked Matt in the beginning after everyone in the book started pointing out his flaws I began to see him in a different light and while it wasn’t always appealing he was a great friend and love interest.
Friends: The friends were a huge part of this story and I believe readers will fall in love with all of them for different reasons just as I did.
POV:
Holding On and Letting Go switches off between Matt and Emerson’s perspective and alternates chapter by chapter.
Overall:
Overall at first I found Emerson extremely annoying and that make reading this book insanely difficult for me. However, as the story went on I grew to love her as a character and I think she’s a great character to model after. Her gradual growth definitely made the story amazing and I really enjoyed how all the characters grew and how the story progressed. All in all Holding On and Letting Go turned out to be a phenomenal and inspiring story. I thought the story was well written and had a great message about how difficult loss is and how hard it is to move on.
Title:
I love the title I think it’s perfect for the story as well as the overall message of the story.
Cover:
Not a bit fan of the cover but I guess it is okay although a little plain in my personal opinion.


The Writing:
The writing was well done. I never felt like an idiot and I felt the language used was that of how teenagers would speak. I really enjoyed the writing and the characters and everything.
Recommendation:
Honestly while at first I didn’t truly get the message of this story after reading it I think everyone can relate in some way to this story. It deals with loss and with healing and I think everyone at one point in their life has dealt with something like that.
Favorite Quotes:

“I don’t know,” Emmy replied slowly.  “Did you ever get checked for STDs after taking a ride on the town bicycle?”  As soon as she said it, she clapped her hand to her mouth and her eyes got as big as saucers.  “I’m sorry.  Why do I keep saying things like that?  It’s like I have an evil little elf in me that chirps out the meanest things at bad times.”

I thought this quote was a pretty accurate description of Emerson: “When has there ever been a rule that Em followed if she didn’t want to?”  Mallory asked and rolled her eyes.  She was right.  Em often referred to “rules” as “mere suggestions”.

About the Author:
I'm not really going to write a biography. Though I am supportive of the high schools and colleges I have attended, it's probably not actually the most interesting stuff about me. I'm going to do a list of five really random things instead for now.
1) I like making lists. It's weird, and I never actually scratch things off of the list.2) I sing and dance in the car like a maniac.
3) For the first six years of my life, I truly believed a shark lived under my bed. I watched Jaws at too young of an age.
4) Without a doubt, I am a night person. I am enormously grumpy when first woken up in the morning.
5) When I was younger, I read almost every Nancy Drew book, both new and old. I had a notebook, and I would take notes to see if I could figure out who the "bad guy" was before Nancy did. We probably tied.