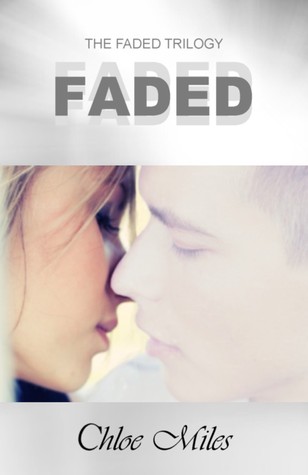 
Synopsis:(goodreads)
"Savannah wanted to kiss him, but she had never even kissed a human guy before, let alone a ghost. How was she supposed to kiss him if he wasn't really there?"

Savannah has never been in love before, but she's in love with Hunter Emmerton. He's cute, funny, charming ... and a ghost. How can you date someone if nobody else can see them?

After seventeen-year-old Savannah Fraser and her three friends are killed in a car accident, they are given a second chance at life by a group of hundred-year-old teenage earthbound spirits who need their help.

Savannah and her friends learn that they are The Chosen Ones, which means they can switch between human and spirit form, heal people, and control the weather ... and they are also now invincible.

The Chosen Ones are the only ones who can defeat The Forces - a group of evil spirits who are slowly destroying the perfect little town of Fort Everwick with violent storms and not-so-natural disasters - and stop them from harming everyone they care about.

The Forces are set on destroying everything Savannah knows and loves, but they also have another plan - they want a new member to join them. They aren't willing to give up until they get the one they want ... and they have Savannah firmly in their sights.

Savannah had never been confident in herself before, but with her newfound powers, she discovers just how strong she and her friends really are. But what Savannah didn't count on was falling in love with Hunter. She's never loved anyone the way she loves Hunter, and she knows he loves her, too. But how can they be together forever if he no longer exists, and she's the only one who can see him?

Will Savannah have enough belief in herself to defeat The Forces, or will they be able to lure her to the dark side and turn her against her loved ones ... and tear her and Hunter apart?

My Review:
Received a copy for an honest review.

I wish I could say I liked this book. Reading this book took me about a month and I felt the same about the book when I started reading it as I did when I finished reading it.

Savannah and her friends while leaving a party get into a car accident and die. When they wake up four people are standing around them and telling them that they died and that they had brought them back to life for a great destiny to save people. They are the new Chosen Ones.

Trying to go back to their  normal lives while keeping their new powers a secret proves harder than they orignially thought. When the group finally realizes their powers and begin to get back to their normal lives, The Forces begin making their presence known.

The Forces were once just like The Chosen Ones, same powers, same have real bodies as the new Chosen Ones. When The Forces start going after Savannah and everyone she holds dear, her and everyone else make sure to stand together to face the evil threat of the forces.

Dislikes about the book: No emotional or real content. None of the characters had real depth. It was just lame description with dialogue. Also, the book just goes on and on and on...with the same stuff happening throughout the book. Plus, predictable much? I guessed what was going to happen in this book from the first chapter. Yeah the first freaking chapter. Also, I didn't like how I didn't believe any of the characters when they would "express their feelings" towards other characters.

Likes: There were a lot of funny scenes in this book that made me laugh, so that's a plus.

Needless do say I wouldn't really recommend this book, but if you're into ghosts stories you may like this.

Favorite Quote:
Savannah looked out of her window at the guests below at her parents’ garden party, then followed her line of sight out to Duke’s stable. When she looked back at Hunter, he was pressing all the numbers on her cell phone. “I’ve heard you talking into this. Is there a person in here?” He looked up at Savannah, who rolled her eyes. Hunter laughed. “I’m just joking, I know about technology. I’ve been around long enough to see it evolve over time. I’ve just never used any of it myself.”