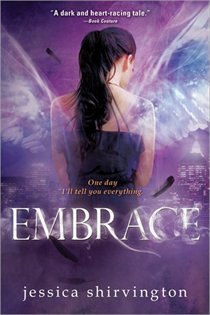 
Book Description: (goodreads)
It starts with a whisper: “It’s time for you to know who you are…”

Violet Eden dreads her seventeenth birthday. After all, it’s hard to get too excited about the day that marks the anniversary of your mother’s death. As if that wasn’t enough, disturbing dreams haunt her sleep and leave her with very real injuries. There’s a dark tattoo weaving its way up her arms that wasn’t there before.

Violet is determined to get some answers, but nothing could have prepared her for the truth. The guy she thought she could fall in love with has been keeping his identity a secret: he’s only half-human—oh, and same goes for her.

A centuries-old battle between fallen angels and the protectors of humanity has chosen its new warrior. It’s a fight Violet doesn’t want, but she lives her life by two rules: don’t run and don’t quit. When angels seek vengeance and humans are the warriors, you could do a lot worse than betting on Violet Eden…

I was really hesitant as to whether I was going to like or read Embrace or not. From the synopsis I thought the story would be another over done angel story with little action.

Plot:
Violet Eden just wants her birthday to come and go. Her birthday is the one day of the year that Violet just wants to slip under the radar and not get presents. When Violet leaves dinner early Steph Violets best friend and Lincoln the boy Violet is madly and irrationally in love with hang at the bar to party. When Violet starts dancing with a hot guy to make Lincoln jealous, it works and they share a hot and heavy kiss in an alley.

Now Violet is more confused on where their relationship stands. Heading to confront him, Violet finds Lincoln talking about all the secrets he’s been keeping from her. Finding out from the boy she’s been in love with since he came into her life to help her become strong has been lying to her about whom and what he is hurts Violet more than anything.

Running away despite all her rules against that very thing she hides away from Linc and his world. While in hiding she feels more alone than ever and finds a new friend, the guy she met at the club, a guy who isn’t a guy at all and has been following her. Phoenix is an exile and as they begin to spend time together a secret plan that the other exiles have put into motion makes certain that Violet has no choice but to embrace her new life and all the dangers and secrets that come with it.

Characters:
Violet was a freaking awesome character for the first half of the book. She’s strong, talented, and while she does wallow in self-pity land for quite a while it doesn’t take up too much of the book. Violet while a strong character does have some weaknesses that I think made her a better more believable and relatable.
Lincoln is one sexy character. While he does withhold information from Violet he is amazingly sentimental and caring to Violet despite her being constantly rude and distant from him.
Phoenix while sexy and sweet at times, there was no way I trusted him through most of the book.
Steph is a great character and friend. While many books have the best friends become distant and then usually have the main character distancing themselves from them. That was not the case with Violet and Steph. The two were constant friends and always covering and calling each other.

Overall:
I really enjoyed Embrace. Embrace’s story has a ton of action, emotional turmoil, hottie guys, and my personal favorite a strong female protagonist. The writing was truly well done with excellent and realistic word choice. There was plenty of description but not too much as you know if you read my other reviews I’m not a big fan of, lots of interaction with characters as well as inner monologue. I loved how in the story I wasn't always sure what was going on or who the bad guy was and that was pretty exciting.

Dislikes:
Violet….okay seriously when she did what she did with Phoenix I threw the books a couple thousand times. Ugh! I was so mad. I hated that she did that and that while most of the book she’s such a strong and amazing character she is controlled so easily. Made me supernova pissed at this.

Title & Cover:
Title totally makes sense with the story because of what Embracing means to Violet and angel-human kind.

Embrace’s cover kicks butt. I love the purple, the city in the background and the beautiful wings extend from Violets back.

Recommend:
I would recommend Embrace to anyone who loves young adult stories that are action packed and full of mystical yet tragic worlds.

All in all:
Embrace is an enthralling story and will leave readers eager for more of Violet and her amazing story.

About the Author:
Jessica Shirvington is the author of THE VIOLET EDEN CHAPTERS also known as THE EMBRACE SERIES. An entrepreneur, author, and mother living in Sydney, Australia, Jessica is also a 2011 finalist for Cosmopolitan’s annual Fun, Fearless Female Award. She’s also one of the lucky few who met the love of her life at age seventeen: Matt Shirvington, a former Olympian and current sports broadcaster for FOXTEL and Sky News. Married for almost eleven years with two beautiful daughters, Sienna and Winter, Jessica knows her early age romance and its longevity has definitely contributed to how she tackles relationships in her YA novels. Previously, she founded a coffee distribution company, Stella Imports, in London, and before that was involved in the management of restaurants Fuel Bistro and MG Garage in Sydney. Jessica is now a full-time novelist and living her dream.
To contact:
Goodreads/ Website/ Blog/ Facebook/ Twitter/
Posted by Reese's Reviews at 1:00 AM