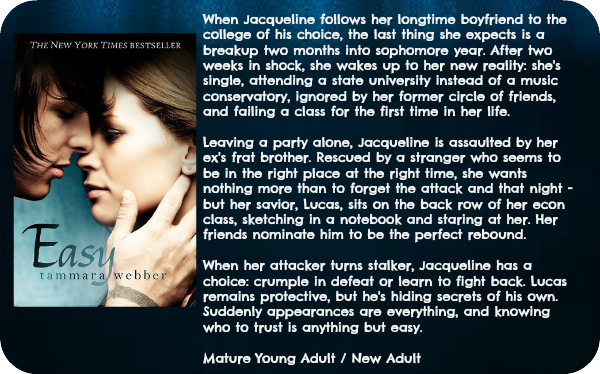 
Jacqueline doesn’t want to go back to her college Economics class where her boyfriend who dumped her to see other people after three years of dating will be. Having decided to just skip the class, and her midterm she’s now on the verge of failing. Her best friend and roommate Erin decides enough is enough and it’s time for Jacqueline to get back to class.

Erin’s voice woke me. “Jacqueline Wallace, get your ass out of that bed and go save your GPA.”

Too bad Erin didn’t stop there. Erin decides that Jacqueline needs to go to a party with her and her boyfriend to try and get out. When Erin decides to stay with her boyfriend Chaz at the party, Jacqueline decides she has had enough of the party. Making her way to the car she never expects what was going to happen. She’s attacked, by one of her ex-boyfriends fraternity brothers, Buck.

I heard the unmistakable sound of a zipper and he laughed in my ear when I went from rationally imploring to crying. “No-no-no-no…”
Just when Jacqueline thinks it’s all over she’s saved. A boy with tattoos, a lip piercing, and the most beautiful clear eyes she’s ever seen comes to save her and takes her home, leaving Buck on the ground by the car beaten and bloody. When reaching the dorm he savior tells her the one thing every person attacked needs to hear and know.

Now all Jacqueline wants to do is move on and forget it ever happened, starting with figuring out a way to pass her economics class now that she’s fallen so far behind. Too bad forgetting is going to be harder to do than she realized since the guy who saved her is in her econ class, works the coffee shop she frequents, and is a volunteer for the self-defense class Erin and her are taking. After talking to the teacher she finds that the only way she has the possibility of passing the class is if she gets a tutor. Praying against all hope she e-mails the tutor and gets more than she ever thought.

On her way back to trying to figure out what she wants to do with her life her friends tell her she needs a rebound guy. After a night out and an intimate encounter with her savior her friends dub him her new rebound guy, and set into motion a way to get “catch” him.

Being close to Lucas is everything Jacqueline has ever wanted. He’s protective, beautiful, and sweet. Having him around makes Jacqueline feel safe, which is something she desperately needs now that Buck has decided to stalk her after his last failed attempt at her.

I’d assumed that what Lucas had done to Buck would be enough. Not that it had prevented him from what he did in the stairwell…or his implied threats.

When a party goes wrong everything that Jacqueline has been trying to hide has to come to the surface in order to save her friend. With Lucas and her relationship being forbidden she still can’t help feel the pull between them and away from her ex Kennedy who is now campaigning for her heart again.

I have to say this book is nothing like I expected. I had high hopes for this book and they were all met. Easy is such a great story with struggles, finding ones’ self, and falling in love. This book couldn’t be any more perfect.

All the characters were amazing Lucas is drop dead swoon worthy sexiness. Jacqueline is strong, funny, and totally a character to look up to. Now while all of those characters were amazing I am so in love with Benji it’s not even funny. He was honestly the funniest character ever!
I love the ending so so much because while Lucas and Jacqueline had their struggles and secrets the love they have for each other was always EASY!


This book has such a great lesson in it and I think that no matter the circumstances, it's not your fault!

Favorite Quote:
Benji: “So…since you know that bit of inside info, and you two left class together the last couple of days…can I assume that somebody’s getting a little private tutoring now?” When I pinned my lips together, he snorted a laugh, held up a fist and sing-songed, “Nailed it!”
[…] “God, Benji. You’re such a bro-it-all.” 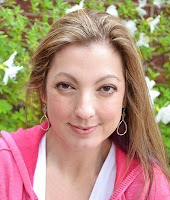 About the Author:
Author of Mature YA/New Adult contemporary novels: Easy, and the Between the Lines series.