Backdraft (The Secret Life of Trystan Scott #2) by H.M. Ward 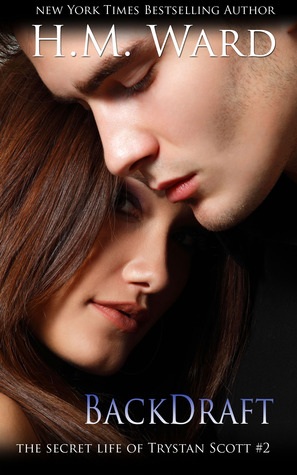 Synopsis: (goodreads)
When Mari realizes that Trystan is the internet megastar, Day Jones, she can’t speak. Every time she listens to his song, it leaves her feeling so much. That song is bewitching. Everyone she knows heard it. As soon as it appeared on YouTube, it went viral, and then the guy who wrote it disappeared. Despite agents and record labels trying to lure Day5705 out, he remains anonymous. No one knows who Day Jones really is—except Mari.

To Trystan’s relief, Mari agrees to keep his secret. Part of him regrets uploading the song, but when he sings to Mari the song that once brought him solace, it fills him joy. In a life like his, joy is fleeting and Trystan plans on grabbing hold whenever a shot at happiness appears. To his surprise, Mari doesn’t realize the song is about her. When Trystan tries to push her to see, he jeopardizes losing her entirely.

One misplaced kiss topples the fragile relationship, leaving Trystan reeling, trying to assemble the pieces and convincing Mari that she’s not just another conquest, even though everything he did—everything he said—makes it seem like she is. It isn’t until Mari decides that being the good girl isn’t working that things steam up. Trystan knows she wants to hook up with someone, and he doesn’t know if he should stop her. Every attempt he makes to win her over goes bad and pushes her further away.

My Review:
I received this book for a honest review.

When Mari finally realizes her feelings for Trystan she runs back to tell him how she feels, only to find out that Trystan is the famous Day Jones, the writer and singer of the new hit song everyone has fallen in love. The guy talent agents are searching for.

Now that Mari knows she'll do anything to help Trystan keep his secret. Of coarse now that she knows he wrote the song, she wants to know more and more who this mystery girl is.

Shocked by the discovery Trystan begs Mari  not to tell anyone. Realizing that he just played for the girl who stole his heart has filled him with a feeling he never had before. Now it takes everything he has not to tell her how he feels.

When they both get in trouble with the drama director that lands Mari a lawsuit, they both end up having to clean up the teachers closet. When everything seems fine they realize they've been locked in, and both of them are claustrophobic. When Trystan asks Mari to kiss him and she doesn't things become more and more awkward in the closet.

Finally released Mari tells Trystan to leave her alone because she knows he'll break her heart. When seeing him with another girl later she asks him about a random hook-up that leaves him wondering who she wants to be with.

When everything seems to be going from bad to worse for Trystan he realizes he may never get what he wants; Mari and a way out.