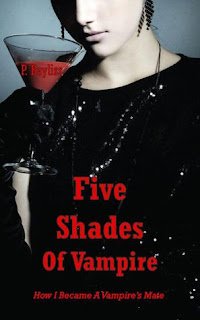 Each level becomes more intense than the previous, culminating in the fifth level which is spoken of only in hush, envious whispers.

Will the love between this mere mortal and her vampire lover be strong enough to overcome these hurdles…and whatever else lies on the other side of the bonding and mating ritual?
My Review:

I received a copy of this book for an honest review.

I got this book a while back and had been dying to read it. After all I am a vampire fan fanatic and anything to do with vampires I am all up for.

I was a disappointed with this novel though. I think what could have fixed it is if the short story wasn’t just that, a short story. The book was too short to have much in it, and I felt the book was just crammed with too much and then too little information.

The title of the book is actually used in the novel which I did find cool because sometimes I feel as if some titles are pulled out of someone’s’ ars or something. Five Shades of Vampire: How I Became a Vampire Mate is about the five stages a human has to go through in order to become their mate forever.

Anyway the story is about a girl names Sarah who is dating a vampire named Xavier. When a mortal falls in love with a vampire the mortal can go through five stages to become their mate. The five stages are all pretty sexual and have a lot to do with overcoming fears, learning control, and becoming equals together.

During the five stages if the human doesn’t make it through the challenges, then her or his vampire lovers will die.

When it seems that all is right in the couples’ relationship, a powerful opponent comes to tear away everything the couple is building towards each other. Sarah must be strong enough to go through a sixth challenge in order to prove that love conquers all.

Some of the parts were in french so make sure to look up what everything means because it truly does give this story that extra bit of love.

Overall, I think this story could have been great, but there needed to be more.

Favorite Quote:
DEDICATION:
To all the women – both vampire and human – who value full
commitment and refuse to settle for anything less.