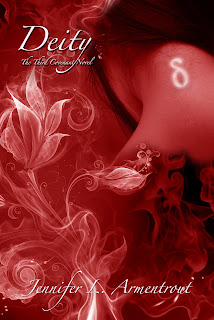 Synopsis: (goodreads)
"History is on repeat, and things didn't go so well the last time. "

Alexandria isn't sure she's going to make it to her eighteenth birthday--to her Awakening. A long-forgotten, fanatical order is out to kill her, and if the Council ever discovers what she did in the Catskills, she's a goner... and so is Aiden.

If that's not freaky enough, whenever Alex and Seth spend time "training"--which really is just Seth's code word for some up-close and personal one-on-one time--she ends up with another mark of the Apollyon, which brings her one step closer to Awakening ahead of schedule. Awesome.

But as her birthday draws near, her entire world shatters with a startling revelation and she's caught between love and Fate. One will do anything to protect her. One has been lying to her since the beginning. Once the gods have revealed themselves, unleashing their wrath, lives will be irrevocably changed... and destroyed.

Those left standing will discover if love is truly greater than Fate...
Book Trailer:

My Review:
Oh my freaking...okay I am going to start with the ending of this book first. WTF!?!?!?! There are not enough profanities in my vocabulary to even describe the ending of this God forsaken book. Needless to say I got a tad creative actually after finishing Deity. I sat there staring at the last words and thought I may have been hallucinating. Guess not because a whole slew of curse words came flying out of my mouth and trust me when I say if you have yet to read Deity...or have already read Deity you know what I'm talking about or you'll find out.

Okay now that that rant is over I am a tad calmer now and can describe the the of the book. Deity was..is a lot different from the other three books if the series. Most of the bad evil villainy people are revealed as well as their evil plots against humanity and well of coarse Alex and company.

As the months nearing Alex's birthday she becomes more and more frightened that when she awakens she will lose herself to Seth. It is her worst fear, almost more than being put on the Elixir. Adien hero of my life comes and saves the day. Telling her she's strong and can do anything if she just believes in herself. Alex's friends also appear to help, for Alex thinking she only needs herself while still dealing with Caleb's death isolates herself. Finally realizing what she was doing she makes amends and tries to move on with her life. But moving on isn't always easy.

Soon Alex is getting death threats by the Order, the only other people that can kill her. Sending out people to protect her Alex is once again at high stakes with Adien. This time though Adien isn't pulling back, and for once may succumb to the undeniable passion Alex and Adien have between them.

Of coarse even as Alex begins feeling safe once again truths are being revealed and the one person she though she could trust betrayed her to the fullest. Still heartbroken from the betrayal more and more secrets are being revealed and nobody knows who is going to be left standing in the end. To make matters worse Alex is about to Awaken and nobody not even the God's were prepared for what was going to happen.

Well, mostly. When she's not hard at work writing, she spends her time, reading, working out, watching zombie movies, and pretending to write.

She is the author of the Covenant Series (Spencer Hill Press), the Lux Series (Entangled Teen), Don't Look Back (Disney/Hyperion) and a yet untitled novel (Disney/Hyperion), and new YA paranormal series with Harlequin Teen.

Jennifer also writes New Adult and Adult romance under the pen name J. Lynn. The Gamble Brothers Series (Tempting the Best Man/Tempting the Player) and Wait for You.
Posted by Reese's Reviews at 1:00 AM