Collide (The Secret Life of Trystan Scott #1)
by H.M. Ward 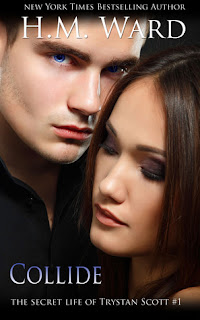 Synopsis:
When Mari accidentally overhears that Trystan is in love, she can't believe it. He's pining over some girl that doesn't know he's alive. The confident swagger and endless stream of girls is a facade. It conceals his loneliness and hides how messed up he's really become trying to flee from a life that's battered him to his core.

Trystan tries to figure out how to make it clear how much he loves Mari, but every insincere kiss and every broken promise haunts him, because she knows them all. Now, Trystan has to prove to the one girl he's actually fallen in love with that she's not just another conquest.

Mari has no idea who Trystan loves, but she can tell that whoever it is has captured his heart entirely. Soon Mari sees the man behind the mask, the guy that Trystan tries so hard to hide. Everything about him is appealing, and too hard to resist.

In a moment of desperation, Trystan uploads a love song he wrote for Mari, but before he can show it to her, the video goes viral. Everyone wants to know who he is, and the only thing shielding him is an anonymous account name and some thick shadows hiding his face. Tyrstan realizes that the consequences of revealing his identity will be disastrous. Everything he's tried so hard to hide will be exposed. It's a secret that is impossible to keep and the only girl who he wanted to hear it will never believe him.

My Review:
I received a copy for an honest review.

Mari and Trystan have been friends since her freshman year.When Mari goes searching for Trystan to go running lines for the play to save their butts, she over hears Trystan talking to his friend Sam about how he's fallen for this girl. A girl who doesn't know he's even alive.

What seems to be insane is actually happening, Trystan Scott is in love. Where most of the time he's into the "love them and leave them" rule. Now his usual swagger is all but gone.

Trystan's life is nothing he wants. He can barely sleep at night due to his abusive drunken father, and he has to work in order to make sure him and his father have food to eat. To add the his turmoil a song he wrote for Mari, his best friend and the girl who he's madly in love with has gone viral and now everyone is looking for him.

When Mari hears Day Jones' song she's immediately drawn into it. She feels for the boy with the haunting and heartbreaking lyrics. Now she's also dealing with the fact that Trystan is now paying attention to her like never before and while she would like to think she's above all the other girls who fall at his feet, but she's not. She hasn't been for a while.

Running to find Trystan how she really feels about him, she finds out a secret about Trystan that leaves her realizing there is so much more to him than she realized.

Overall, I enjoyed this story, not as much as Holly's other stuff, but this story is still amazing. I also love that the book is in multiple POV's! Trystan is sexy, tortured artist...can anyone say yum?