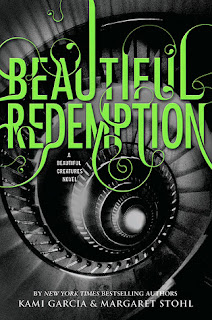 Synopsis:(goodreads)
Is death the end . . . or only the beginning?

Ethan Wate has spent most of his life longing to escape the stiflingly small Southern town of Gatlin. He never thought he would meet the girl of his dreams, Lena Duchannes, who unveiled a secretive, powerful, and cursed side of Gatlin, hidden in plain sight. And he never could have expected that he would be forced to leave behind everyone and everything he cares about. So when Ethan awakes after the chilling events of the Eighteenth Moon, he has only one goal: to find a way to return to Lena and the ones he loves.

Back in Gatlin, Lena is making her own bargains for Ethan's return, vowing to do whatever it takes -- even if that means trusting old enemies or risking the lives of the family and friends Ethan left to protect.

Worlds apart, Ethan and Lena must once again work together to rewrite their fate, in this stunning finale to the Beautiful Creatures series.
Book Trailer:
My Review:
I have been putting off reading this book since it's release in October. I have this thing about never wanting series to end so I kept postponing reading it until recently, after I saw the movie.

All Ethan Wate ever wanted was to moved out of the suffocating town of Gatlin. Then he met Lena Duchannes and her family of Casters and his entire life changed.

Now Ethan's dead, having to have jumped off his towns water tower to right all the disasters that were plaguing the world, and to reunite his soul. Being dead isn't anything like Ethan expected. He awakes on the other side to find Gatlin, or at least the otherworld Gatlin where he finds Aunt Prue and his mom. While being reunited with his mom is everything he's ever hoped for, his heart aches for Lena. When Ethan gets word that his death is a mistake, Ethan goes on a mission that could cost him his soul and the safety of the world if he fails.

Meanwhile, after Lena receives numerous messages from Ethan somehow she does everything she can to get Ethan everything he needs to come back. Even if that means facing down Hunter and Abraham, because what Ethan needs and has asked everyone to help send to the other side is The Book of Moons. It will take everything Lena, and her friends and family have to get their hands on the book to send it to the other side.

If Lena fails to send the book Ethan will be stuck in the otherworld forever, and if she succeeds Ethan must battle against the evil from the Far Keep.

I have to say after watching the movie and then reading the book, the humor in the book made a lot more sense.

I also loved how the book had Lena's perspective in it!!! Ah!! I was squeeling when I read the page that read "Lena"! She's such a strong character and while I love Ethan it's still awesome to get into the mind of the other characters at times.

Beautiful Redemption did not disappoint. I fell in love with the Caster Chronicles from the very beginning and I had high hopes this book would be every bit as action packed and amazing as the other books. Like I said, this book didn't disappoint. While Ethan may be dead he is still an amazing character who is driven by his love for Lena and his friends and family.

I have to say I may have cried a little...a lot at  the end, but such a great story! Hope everyone checks out the Caster Chronicles at some point, and I do recommend seeing the movie at some point as well. 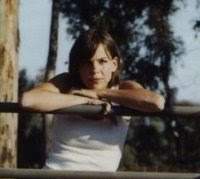 Writing has gotten me in and out of trouble since I was 15 (back then, mostly just in trouble.) For 10 years, I designed &/or wrote for lots of video games, one of which was nominated for “Most Innovative Game Design,” but I lost to a rapping onion. If you know games you get why my two bad beagles are named Zelda and Kirby.