What's it about?
Author Appreciation is going to be a monthly blog posting on my blog to give a shout out to some of my favorite authors out there.
I think it's important to show just how awesome these authors are for writing all these amazing books out there for our enjoyment. For without them there would be no amazing books, and I would be writing a blog about noodle straining or something of that nature. 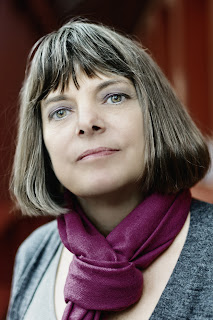 Cinda Williams Chima is honestly one of my favorite authors as of last year when I met her at the RT Booklovers Convention last year. I was given a free copy of her book The Gray Wolf Throne (Seven Realms #3). I hadn't ever even heard of her and when I realized the book I had was book three I was like, well I need to go get one and two. I honestly fell in love with her writing, story telling, and just everything. Her writing is like nothing I have ever read before. I recently just finished The Crimson Crown, the fourth and final book in the Seven Realms series and knew I this month I had to dedicate to her since I loved that book and series so much.

Q: How do you pronounce your name?
A: http://www.teachingbooks.net/pronounce.cgi?aid=4809 New York Times and USA Today bestselling author Cinda Williams Chima grew up with talking animals and kick-butt Barbies. She began writing poetry and stories in third grade, and novels in junior high school. Her Heir Chronicles young adult contemporary fantasy series includes The Warrior Heir (2006), The Wizard Heir (2007), and The Dragon Heir (2008), all from Hyperion, with two more books forthcoming.
Chima’s best-selling YA high fantasy Seven Realms series launched with The Demon King (2009), followed by The Exiled Queen (September, 2010) and The Gray Wolf Throne (August, 2011.) The Crimson Crown is scheduled for fall, 2012.
Chima’s books have received starred reviews in Kirkus and VOYA, among others. They have been named Booksense and Indie Next picks, an International Reading Association Young Adult Choice, a New York Public Library Book for the Teen Age, to the Kirkus Best YA list, and the VOYA Editors’ Choice, Best Science Fiction, Fantasy and Horror, and Perfect Tens lists. Her books also appear on numerous state awards lists. Both series are New York Times bestsellers.
Chima was a recipient of the 2008 Lit Award for Fiction from the Cleveland Lit and was named a Cleveland Magazine Interesting Person 2009. She lives in Ohio with her family, and is always working on her next novel.

Want to know more about Cinda Williams Chima? Check out her: