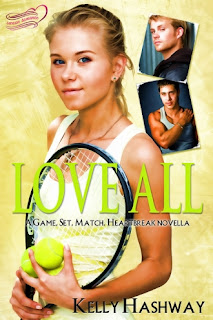 
Synopsis:(goodreads)
Seventeen-year-old Meg Flannigan wasn’t very lucky at love. In sophomore year, her idiotic boyfriend dumped her by making out with another girl in front of her locker. Ouch! Now a senior, and with a little more self-confidence, Meg catches the eye of not one, but two guys at school. Lucky! Both attend her tennis matches, vie for her attention, and are each gorgeous in their own way. So what’s the problem? Meg has already chosen one of them, and the one waiting in the sidelines will do anything to change her mind. She’s enjoys the attention right up until it’s her heart that’s caught in the middle, and she risks losing both. Can Meg Love All, or will choosing be her undoing?

1. What gave you the idea to make the Love All?
I was in a few love triangles when I was in high school and they actually stemmed from my own insecurities and heartbreaks. I don't think I'm the only one who's experienced that, so I wanted to tell this story for all those girls who have ever found themselves torn between two guys or who have felt insecure after they've had their hearts broken.

2. Have you always wanted to be a writer and if not what was your dream career?
Growing up, I didn't fully comprehend that you could make a career out of writing. Once I figured that out, I strove to make that a reality for myself. It's one of the best jobs in the world.

3. Do you have a favorite aspect about writing YA or any type of novels?
Writing YA novels let's me tap into the emotions I felt as a teenager. Everything is heightened during those years. You feel things so fully and that's something I think adults tend to miss out on. Getting to relive those emotions is amazing.

4. Did you have a favorite novel growing up? If so did that novel have any impact on your writing?
I devoured books when I was growing up. I gravitated toward paranormal and horror, but I loved the ones that had big romantic subplots. R.L. Stine's Fear Street books are great examples.

5. What is it like having multiple novels coming out around the same time in one year?
It's a little surreal to be perfectly honest. This has been my dream and now it's coming true in a big way. I couldn't be happier about it.

6. Who was the hardest character to write and who was the easiest?
Meg was tough for me to write because she's broken in so many ways. She's a victim to her own emotions, which I think happens to a lot of teenagers. Grayson, Meg's best friend, was the easiest and maybe even the most fun to write because she tells it how it is, and I've always appreciated people who can do that.

7. Did you find any difficulty writing the romantic scenes?
The romance scenes gave me goose bumps. I channeled my inner seventeen-year-old, and pulled from my own experiences. I admit that I cried a few times writing this series.

8. What for you is the hardest part about writing?
When I write, I get very emotional. I pour my feelings onto the screen. The hard part is knowing that not every reader will agree with my character's choices and some will even judge my characters.

9. When you aren't writing, what are you doing?
I'm a mother to a soon-to-be six-year-old daughter and she keeps me very busy when I'm not writing. I'm also an avid reader and runner.

10. After you completely finished Love All, who was the first person to read it?
My critique partners, who are absolutely amazing with their feedback.
My Review:
Love All is one of those addicting short reads you just can't put down, then once you do you're like "where's the next one?" That was totally how I was feeling after I finished Love All.
Meg Flannigan is one of the best players on the tennis team. She's dating the schools quarter back and life seems perfect.

That is until the day she's practicing with her best friend Grayson and the guy she's had a crush on for the last two years shows up and asks her to practice with him. Even though she's seeing someone else, someone who has told her he loves her, she can't help feeling a connection to Noah, the boys star tennis player.

When their practice turns into another hang out, one where Noah admits he likes her and that Ash isn't right for her Meg doesn't know where to go from there. When Meg shows up late to a game with Noah in tow emotions run high and Meg knows she'll have to choose soon or she'll risk another broken heart.
Rating: 3.5 bats!

Reading is a thing of magic. It has allowed Kelly to enter into worlds she never would have known. She's cried, laughed, and been scared right alongside her favorite characters. And her hope is that one day kids will do the same for characters she's created. Kelly wants kids to see that reading is one of the greatest gifts. Luckily, her daughter already agrees!
About Swoon Romance:

Swoon Romance creates the kind of stories that make readers swoon. Our stories are full of second chances, forbidden love, sexy encounters, hidden feelings, happily ever afters and flirtatious firsts. It's easy to get lost in one of our books. Go ahead . . . swoon.  Swoon Romance publishes sweet and angsty romances for young adults as well as hot and steamy ones for adults. All SRYA titles for young adults are clean with no mature scenes.