Author Interview: Inked by an Angel

Inked by an Angel (The Cupid Chronicles#1)
by  Shauna Allen 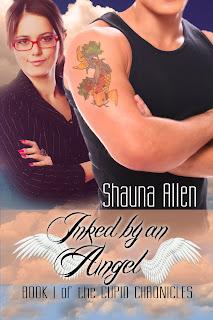 Synopsis: (goodreads)
Jed Gentry is doing just fine, thank you very much, running his tattoo studio in Austin, Texas. So what if people think he’s a bit on the surly side? He’s been burned by his ex who sticks around to torture him and he lives with a family heartache that he’d rather not talk about. But he’s got a thriving business, his dream car, and good friends. Not much to complicate things. At least, not until she walked in…
Kyle O’Neill has had it with being the sheltered daddy’s girl at the family accounting firm and is ready to spread her wings and fly on her own for the first time. Unfortunately, it seems she’s about to fall flat on her face when her first and only client is – gulp -- a tattoo artist! Her country club upbringing certainly hasn’t prepared her for this place or the sizzling attraction her traitorous body feels for the grumpy owner.
But there is a Divine conspiracy at work here pushing these two together. And they are hell bent on bucking the Heavenly plan all the way. Luckily, their angel is a true believer and pulls every trick he knows from under his halo to make this a match made in Heaven.
Who says God doesn’t have a sense of humor?
Today on the blog is Shauna Allen, the author of Inked by an Angel here to answer some questions about her newly released novel.
1. When did you first come up with the idea for "Inked by an Angel?"
I think it was sometime around October of 2010. I was housesitting my parent’s home in the beautiful Texas Hill Country where I can always get a lot of great writing done in the peace and quiet. I was in a state of almost meditative free-writing and just letting whatever wanted to come out of me flow freely. That’s when the prologue came, including that all powerful ending line, “The Angel made me do it.” I remember sitting back thinking, ‘Now what?’ An angel? Who? Where? Uh oh. Well, I gave it some thought, then I built my entire story and my entire series around that one line of dialogue.

2. What made you decide to make the book into a series instead of a stand alone?
I’ve always loved series. I really love being able to follow characters I love through several books, and seeing what happens to characters I loved even though they aren’t the central protagonists anymore. It’s fun…like keeping in touch with old friends! Plus, I thought my angels were fun and they needed more than one story. So far, the readers have agreed! J

3. Which character was easier to write, Kyle, Jed, or Michael?
Easiest? Well, I dunno about that. Believe it or not, it wasn’t my heroine, even though I’m a girl. I really had to stretch to dig deep into her internal conflict and make her three-dimensional. I don’t know why, but I’ve always preferred the male point of view. And though Michael was a ton of fun, I guess I’d choose Jed. Though I also had to dig deep, I knew him the best from the get-go so he wasn’t as difficult to write.
4. Will we be seeing any of the characters from "Inked by an Angel" in the Sequel?
Absolutely! I wouldn’t have it any other way! That’s what sequels are all about! Jed and Kyle will be there, plus the angels, and a few new characters, too!
5. Do you have any tattoos that were represented in your book?
Well, I will admit to having some tattoos, and to loving them on a man, but I don’t have any from the book. Jed’s specialty is dragons, and that’s not very feminine, I’m afraid. But, Michael does angels and I do have a pair of angel wings. Does that count? J

6. As a writer, who did you relate to more when you were writing your characters?
I believe it is a true mix of all three of my characters in my personality. Michael’s spirituality calls to me, as does Kyle’s inner insecurities. But, I’d be lying if I didn’t say I bonded the most with my hero, Jed.

7. I noticed travel was a big part in this book, is that also true in your life?
Somewhat. Not to the same places, but my parents are world travelers as my father is American and my mother is Australian. They married in New Guinea and traveled the world before they settled in Texas. I’ve vacationed and/or lived in Seattle, Panama, San Francisco, Western Australia, Mexico, Bahamas, Texas…and a few others!

8. What made you want to postpone the emotional stuff until the very end?
I don’t know if that was necessarily an intentional decision on my part, so much as what felt natural to my characters. But they definitely had specific character arcs to accomplish before they could find their happily-ever-after and that included dealing with their ‘emotional stuff’ – even if it was hard!

9. Is there a particular song or soundtrack or anything like that, that you played while writing this novel?
Most definitely! I am one of those writers who must have her trusty iPod to write. I figured out that I am more creative with my tunes going in the background. Every character and/or book I write has a song, usually very early on in the writing process. In the case of Inked by an Angel, each character has a playlist, which you can check out on my website, www.shaunaallen.com under the Fun Stuff tab and Meet my Characters. But, by far, the song that got me through many days of writing this novel was Jed’s song, Never be he Same by Red. The video is there if you wanna have a listen—it’s awesome!

10. What would you say was your favorite scene to write?
You’re asking me to narrow it down to just one?  Wow.  That’s almost like picking my favorite child!  LOL. Well, there’s the big meet, the intro of all the angels, the multiple scenes of sexual tension between Kyle and Jed, the black moment when Jed thinks he’s lost her to her ex-fiancé . . .

But I think I’ll go with the scene at a restaurant in the Texas Hill Country.  Their matchmaking cupid,
Michael, has finagled a scheme to get them away alone, and they are finally making some headway in their confusing feelings for each other. Well, sort of . . .

“So, Muffet,” Jed asked with a tip of his beer in her direction, “did you enjoy fishing today? You did pretty darn good, after I baited your hook.”

Kyle sipped on her second margarita of the night. She was parched after their day out on the water. And she was fairly certain this Mexican restaurant was skimping on the tequila because she wasn’t feeling any of the warm fuzzies she usually did when she had a drink. And she always stopped at one. She knew her limits and she was a lightweight. “I had a good time. Did you?”

He munched a chip loaded down with salsa. “I would’ve had a better time if you hadn’t caught the bigger fish,” he said with a grin.

Yes, she did know it. That was the problem. She sipped her drink. The waiter served their food on sizzling platters, giving Kyle a welcome diversion from her wandering, hormonal thoughts.

Well, that's that. I want to thank Shauna for stopping by the blog today to answer some questions about her amazing book!! Want to know what I thought of Inked by an Angel? Check out my review HERE!