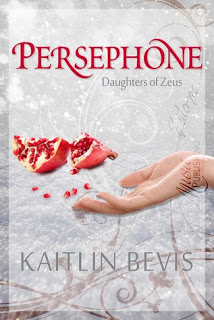 Synopsis: (goodreads)
There are worse things than death, worse people too

The “talk” was bad enough, but how many teens get told that they’re a goddess? When her mom tells her, Persephone is sure her mother has lost her mind. It isn’t until Boreas, the god of winter, tries to abduct her that she realizes her mother was telling the truth. Hades rescues her, and in order to safely bring Persephone to the Underworld he marks her as his bride. But Boreas will stop at nothing to get Persephone. Despite her growing feelings for Hades, Persephone wants to return to the living realm. Persephone must find a way to defeat Boreas and reclaim her life.
My Review:
I received a copy of this book for an honest review.
Persephone isn't your normal average teenage girl. Sure she goes to school, and is often times made fun of my many of the students for numerous things. She likes music, and she works everyday at her mothers flower shop. But she hears whispers in the wind and constantly feels as if someone is watching her. Her suspicions are confirmed when a strange man attacks her and tells her he was sent by someone to find her and is attacked. That's when her mom tell her that Persephone is a goddess, and so is she. Thinking she's crazy she takes off to talk to her best friend Melissa who come t find out has known all along and is her priestess. Going to the park to thing about things she's attacked by Boreas, the god of winter and then quickly saved by Hades, ruler of the underworld. Hades thinking quickly kisses her and turns her into his queen.

Waking up in the Underworld Persephone is pleasantly surprised by her surroundings. She meets new friends, one happening to be her half sister Helen of Troy and Cassandra who is so full of energy and helps Persephone adapt to the world around her. Soon Persephone is meeting everyone in the underworld and becoming extremely popular with the souls that inhabit it. She's also starts to learn about her powers and everything surrounding the God's.

However, while everything seems to be going perfect Boreas is still searching for her, and will stop at nothing to find her. Even being Hades bride isn't stopping him from using all his power to try and find her. What's worse is that while Hades is often times harsh, and crude he has a different side to him, a side that lures Persephone to him. Everything seems to be going normal, until Boreas uses the one thing he knows will bring Persephone out in the open, he kidnaps Melissa, and if she doesn't come to him he will kill her. Fighting to figure out what to do she decides to take a risk, but does she have enough power to survive a God that had lived for so long?

Persephone is an amazingly awesome character. She's not too whiny, and while she grows up a lot in this novel, I still like that she's often unsure of things as well as herself. I also loved how she strives to become a stronger better person throughout the whole novel. She didn't sit around waiting to have everyone fix things for her. All in all she was an amazing narrator and protagonist. Hades is one drop dead sexy God. Even though he seemed to be an ars sometimes, his ability to care about the good of everyone made him even more loveable. During some of the scenes while I thought his reputation may have just been rumor, he she's his dark side enough to assure he is as bad ars as rumors and stories led me to believe.

Overall, I loved this book. I fell in love with the story line, and the characters right away. Kaitlin Bevis did a really great job describing everything while making the story interesting and not lag with large sums of detail, just how I like it. Persephone (the book) also had a lot of humor in it so that was especially delightful. I could not put this book down once I started it and I loved that while some parts were predictable not all of it was! Plus that ending! Complete awesomesauce, and I can not wait to read the second one: Daughter of Earth and Sky (Daughters of Zeus #2)

Favorite Quote:
This quote highlights a lot of Persephone and Hades relationship through much of the book.
""Uh, what did you do today?"
He looked surprised by the question. "It's barely been an hour since I last saw you."
"It's called small talk," I snapped. "You should try it sometime."
He sighed. "Fine. "I spoke with Hestia about your history lessons, arranged for you to begin self- defense lessons with Charon-"
"What?" Charon piped up from his end of the table. "When did that happen?"
"Just now," Hades said around a bite of chicken. "I'm multitasking.