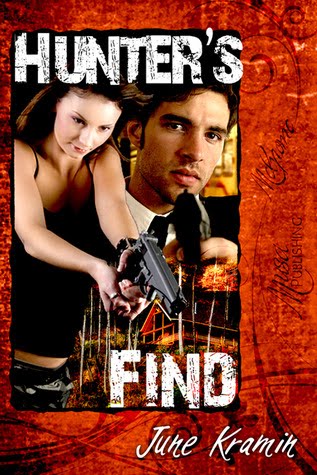 Hunt is a small town Sheriff who finds himself in for more than he bargained for when he discovers Mandy beaten and unconscious. After repeated attempts of escaping him, he finds himself now her captive instead. Mandy convinces him she’s after her husband who has kidnapped their daughter and will stop at nothing to find her.

Although his instincts tell him differently, Hunt becomes involved with her and agrees to help. What he doesn’t know is there is no child. Mandy is hiding her involvement with the FBI and the mob, and after revenge. Hunt is in over his head tracking her husband to the isolated cabin and the backlash it causes a year later.
My Review:
Received copy for a honest review.
Hunt lives in a small town where everyone knows each other. There is little crime, and as far as excitement goes...well there isn't much. Whenever Hunt wants to get some action he heads out of town, where no one will recognize him. One night on his was home from the bar he discovers a girl lying unconscious in the bushes with blood dripping from her head, and that's where the mystery surrounding the girl starts and Hunt's troubles begin.

Mandy Smith is truly surprised when she wakes up to find she's in the hospital. She's soon to escape from the hospital only to be captured again, by Hunt. After he escape attempt Hunt places her under protective watch and tries to get some information out of her. Realizing Mandy is going to give up nothing willingly, Hunt is forced to watch her at all times. However, soon Mandy finds another way to escape and steals a cop car, a cop car with Hunt inside of it. Together they take off on an adventure together that becomes more and more complicated with each passing minute.

Soon feelings begin to emerge even in the depths of danger Mandy and Hunt find themselves in. When all seems to be said and done will the truth about Mandy's dark past be put behind her? Or will she be forced to run from those that have continuously tried to kill her? Will Hunt and Mandy find love in one another? Or will Mandy's past be too much for even love to survive?

I totally fell in love with this book. The action packed scenes, the hot sex, and the hilarious characters honestly made Hunter's Find a great book to start off the year for me. I felt every page was filled with great writing and description. The characters were easy to like and I have to say I could not put this book down for more than a few minutes at a time. Hope you all like the book and pick up a copy. I am now dying to read the second book (Amanda's Return)

June, who prefers to go by Bug, was born in Philadelphia but moved to Maui, Hawaii when she was four. She met her “Prince Charming” on Kauai and is currently living “Happily Ever After” on a hobby farm in a small town in Southern Minnesota. She enjoys riding her Paint horse, Ringo, around the small ghost town they are playfully reestablishing with the neighbors, and playing in Photoshop. Her son and daughter are her greatest accomplishments. She takes pride in embarrassing them every chance she gets.
Giveaway!!!