Review: There Are Giants in This Valley

There Are Giants in This Valley by Jack Hillman 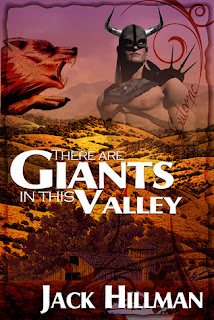 
Synopsis:(goodreads)
A young boy moves to the Lehigh Valley, meets beings from another dimension and joins a battle to save two worlds!

Thirteen-year-old Eric Johnson never wanted to move out of Philadelphia.

But the untimely death of his parents left him little choice in the matter and dropped him in the farm country outside the Lehigh Valley, an hour away from his old home, living with an aunt and uncle he barely knew. Used to the big city with its constant action and excitement, Eric found the slow pace of the rolling farms frustrating. He kept looking for ways to move back to the city, back to his friends and all his familiar activities.

But when Eric helped a tall, blond-haired stranger escape from a pack of wild dogs, he took the first step in an adventure that took him out of the mundane world of Eastern Pennsylvania and dropped him in the middle of Norse mythology; right at the heart of a centuries old war between the Norse Gods and their ancient enemy, the Frost Giants.

My Review:
I received a copy of this book for an honest review.

I have to say There Are Giants in This Valley was definitely not was I expected and I was pleasantly surprised.

Eric Johnson has just moved in with his Uncle Al and Aunt Cindy, struggling to find a place within this strange family. He doesn't understand his uncle who spends all his days reading and talking on the phone, nor does he want to. Struggling with his strange new home he goes out into the fields to think and be alone. That's when he spots a strange man running from a pack of wolves. Helping the man to safety the strange man tells Eric he owes him one. A few weeks later Eric goes to the same place to eat when skin heads come and attack him, the strange man appears out of thin air and saves him.

The next thing Eric knows he's waking up in a strange place. His wounds healed, and he's surrounded by rock people. He soon finds out he's in Aesir, Asgard. There he meets all the Norse Gods and their great enemies the Frost Giants. Eric also makes a number of friends and becomes almost a family towards everyone he meets including Rock Dwarfs, Gods such as Odin, Thor, and Loki, and the Valkyries. As Eric is discovering this other world he learns that the Frost Giants are preparing for a war with Aesir that could not only destroy all the inhabitants of Asgard but they also hope to gain control of Earth. The Frost Giants are using skin heads to spread the hate across Eric's home, and when Eric's family and friends become jeopardized he must learn how to fight like the young warrior that he truly is to save them, and the new friends he has come to love.

Will Eric save Earth and the people of Aesir? Or will the Frost Giants prevail in enslaving all of humanity? With both otherworldly and human technologies coming together to create all all out war who will prevail in the end? This novel is kick butt, the only problem I had was the long parts of description. Other than that Eric as well as the other characters were amazing to read about. Jack Hillman truly created an amazing world full of magic, technology, and even some humor. Hope you go get your copy!