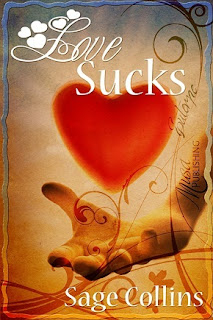 Mailee is a Haustrix, an otherwise normal girl with a demon gene that causes her to consume love from any human she touches. Afraid of draining anyone completely, she's been leading an isolated life, relying on Eric, a hunky lust-draining Haustor and the only person she can safely touch. She's content to avoid humans for all but the quickest possible hand-brushes with the dreaded cheerleaders to keep from starving.

Until she meets Logan, a diabetic who is the first human to understand Mailee's anguish over her diet. But growing close to him means risking his love for her. Mailee's convinced it's time to do something--anything--to become human. But the only antidote requires her to release and be systematically infected by demons representing each of the Seven Deadly Sins. Sloth and Pride? Okay, fine, but sins like Wrath and Envy aren't so easy, as proven when possessed-Mailee punches the cheerleader who's making eyes at Eric. Can she honestly get through all the sins?

Not to mention this new issue--is she interested in Eric instead? Because if she turns human, she'll lose him. Forever.
My Review:
I received a copy of this book for an honest review.

Mailee Jones life is one big epic love suck. Mailee is a Haustrix which means she has a demon gene which causes her to suck love out of anyone she touches. If she doesn't receive her daily dose of love from the students or people around her she'll starve to death. Mailee's life revolves around cheering all of her close friends on, doing the cheerleaders homework, and having no friends. Then one day a new student arrives with love flowing off of her in waves. The girl; Joanne Sparo wants to become Mailee's new and pretty much only friend. Despite her better judgement she decides to do just that become her friend and never touch her. Although their friendship is somewhat strained they find friendship in one another and soon Mailee meets Logan, Joanne's diabetic step brother. Logan and Mailee soon become fast friends, connecting over each others weird and crappy diets. Soon those Mailee realizes she will be he only Haustrix for her long time crush Eric who used to be best friends with Mailee's brother before he skipped town. The only person she'll have left is Justin, a friend of Eric's whom she has never trusted.

One day Mailee finds a box of old things detailing a way for a Haustrix to become human. After finding this out Mailee wants nothing more than to become human. To be able to love without fear of one day accidentally taking away the other persons love for her. She sets off on a mission with Logan and Eric to become human. The task; become infected with the Seven Deadly Sins and then be freed from her curse. However, the curse is costing Mailee more than she thinks she can handle and she soon realizes that if Mailee becomes human she may never touch Eric again, the boy she has always loved.

After I finished this book my first thought were a tad annoyed at the ending, however thinking about the ending a bit longer I realized she made the right choice. I have to say I did enjoy this book and could not put it down. There are a lot of great scenes and I loved how Logan and Mailee bonded over their crappy diets. One thing that did bother me was Eric. He was a total jerk to Mailee most of the time but other times he was like prince charming and what he said near the end of the book ticked me off. Other than that? Awesome!
Rating: 3.5